An ironwork bandstand in south London where David Bowie organised and performed at a festival 50 years ago has been given Grade II-listed status.

The bandstand in Beckenham was the centrepiece of a free 1969 music festival organised by Bowie in the spirit of Woodstock.

It took place on Croydon Recreation Ground, where the bandstand sits, shortly after the musician released his first hit single Space Oddity.

Bowie performed from the bandstand stage to a crowd of a few hundred people. It's also rumoured that he wrote the lyrics to Life on Mars while sitting on its steps.

The bandstand, which was built in 1905, is believed to be the only surviving example of work done by the McCallum and Hope Iron Foundry from Glasgow.

It was given listed status on the 50th anniversary of the festival, which is now held annually, by the Department for Digital, Culture, Media and Sport on the advice of Historic England.

Bowie, who died in 2016, has been a source of inspiration in the design world since he rose to fame in the 1970s.

The V&A held an exhibition of his most important costumes and set designs in 2013, and his album covers have since appeared on stamps. Bowie's secret collection of Memphis furniture caused a stir when it went up for auction after his passing.

Popularised by the Victorians, there were once over 500 bandstands across the UK on parks, seaside piers and promenades.

Although live music is rarely performed in public by a brass band these days, contemporary architects are taking up the challenge of re-imagining the sites where they once stood as contemporary arts performance venues. 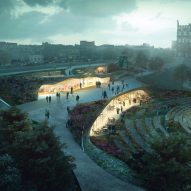 In Edinburgh, American studio WHY has won the competition to create a new events space on the site of an old bandstand. The Ross Pavilion, which is overlooked by Edinburgh castle, will be a series of undulating roof gardens topping glazed stages.