The store opened its doors on Soho's Beak Street this weekend, signalling the first time that UK shoppers are able to "experience the Ganni universe in full" – until now the brand has exclusively been available online or via high-end fashion boutiques.

It also has 22 branches dotted across Denmark, Norway and Sweden.

"It's been really important for us to create a space that is both inviting and inclusive, where people want to come and hang out," Ditte Reffstrup told Dezeen.

"[The store] is much like the way we Danes decorate our homes, full of colour and different surfaces and textures." 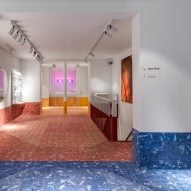 Peripheral walls have been painted sky-blue or bubblegum-pink, while a couple of chunky, L-shaped partitions are butter-yellow.

The floor is a similarly clashing mix – in some areas it's clad with red tiles, while in others it's been covered with navy carpeting or timber boards.

Garments are suspended from simple silver-metal clothing rails that curve at the corners.

Accessories like shoes and handbags are presented on large chests of drawers crafted from recycled plastic waste – they nod to Ganni's new in-store Take Back scheme, which allows customers to drop-off their unwanted clothing and shoes.

They will be sorted, recycled and fed back into the textile or footwear industries by closed-loop recycling company I:CO. Any profits made from the scheme will be also donated back to I:CO's research projects.

Decor is provided by a handful of artworks, vintage ceramic pots and striped rugs that are made from upcycled fabric from previous Ganni collections. Brightly-hued stools by Finnish architect Alvar Aalto have also been dotted throughout.

"We don't have an elitist approach to art, we just instinctively go for what we like," added Ditte Reffstrup.

The opening of Ganni's London store forms part of the brand's global expansion scheme, which will also see flagships open in New York and Los Angeles in late 2019.

"I've been going to [London] for inspiration since I was a teenager – it was my first big-city experience. Coming from a small town in Northern Denmark, my whole world cracked open," explained Ditte Reffstrup.

"It's always been our mission to create a Copenhagen-based brand with global ambitions and share our Scandi 2.0 sense of style with the world," she continued.

"Now with Ganni Beak Street, it feels like it's all starting to happen."

London's trendy Soho is already host to an abundance of fashion and accessories stores.

Eyewear brand Ace & Tate opened a branch in the neighbourhood at the end of last year, which features primary-coloured floor tiles and a pair of neon eyes that look out at passersby on the street.