FujiwaraMuro Architects has built a house in Osaka, Japan, which is separated from the street by two curved concrete walls.

FujiwaraMuro Architects designed the three-bedroom family house in Osaka's Konohana ward, to allow for outdoor parking in front of the house.

The studio created a pair of curved concrete walls that define two areas for cars to park, while blocking them from view from inside the home.

The concrete arcs are staggered, with one directly in front of the house's main living space and the other enclosing three of the parking spaces at the front of the site.

In Osaka concrete walls are often used to assert boundaries between private and public land. The studio aimed to redesign the walls to create an appealing streetscape and balance views in and out of the single-storey house.

"Sometimes blocking lines of sight and sometimes inviting people in."

The rounded lines formed by the offset walls were designed to guide the residents' movements in and out of the house, simultaneously allowing glimpses of the street from the entrance.

"The walls do not segregate public, private, outer, and inner zones, but instead exist as an integrated component of daily life."

At the front of the house a Japanese-style living, dining and kitchen room opens out on a courtyard enclosed by one of the curved concrete walls. 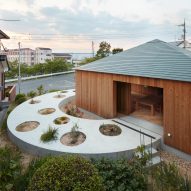 Within the courtyard, a ledge steps down to a raised timber platform, from which the family members and guests can sit on the ledge to relax.

Occupants standing on the elevated floor are able to peer above the concrete walls, which are otherwise too tall for those on street level to look over.

Behind the main living space are two bedrooms along with a bathroom.

Theses spaces are divided from the home's entrance lobby and main bedroom by the concrete arc, which extends into the house and contrasts with the exposed timber frame.

Japanese architects often design for the privacy of the inhabitants living in crowded cities. FujiwaraMuro Architects deliberately restricted views out in the windowless House in Toyonaka, which also features in our roundup of other bunker-like houses found all over the country.