US firm William Rawn Associates has created a series of buildings for a performing arts campus in western Massachusetts, where retractable glass walls allow music to spill outdoors.

The Linde Center for Music and Learning is located on the southern edge of the 524-acre (212-hectare) campus, which is located in the towns of Lenox and Stockbridge in the Berkshires.

Established in the 1930s, Tanglewood houses several music schools and serves as the summer home for the Boston Symphony Orchestra. A range of concerts are held on the campus, from classical music to jazz and pop.

Perched on a small ridge, the complex overlooks the verdant campus and the Berkshire Hills.

The centre's built area encompasses 24,000 square feet (2,230 square metres). Designed to be used year-round, the complex serves a range of functions, from hosting performances to housing the newly established Tanglewood Learning Institute. The centre will also be used by cultural and educational organisations within the region.

Rather than create a single building, the architects produced "a series of pavilion studios that engage the landscape, including a century-old red oak tree".

Three of the four buildings – Studio E, the Gordon Family Studio and the Volpe Family Studio – are dedicated for rehearsals and performances, with the largest able to accommodate 270 musicians. The fourth pavilion houses a cafe with a sheltered terrace.

Facades are wrapped in tongue-and-groove siding made of western red cedar – an earthy material that helps the structures blend with the natural setting. The studio buildings, which are trapezoidal in plan, are topped with shed roofs made of zinc-coated copper. 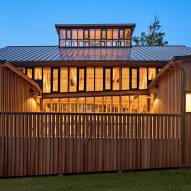 Maple was used for interior walls and flooring. To allow for customisable sound conditions, the team incorporated motorised or manually adjustable acoustic curtains into the studios, either left visible or concealed behind wooden slats.

In several of the buildings, retractable glass walls enable the interior to merge with the surrounding landscape. The transparent walls are also meant to encourage social exchange and foster a sense of community.

The studios are the first year-round structures on campus to have both heating and air conditioning. The facilities also offer webcasting and broadcasting capabilities, enabling Tanglewood to gain exposure among a broader audience.

The Linde Center joins other notable works of architecture on the Tanglewood campus, including the Koussevitzky Music Shed, a fan-shaped building by architect Eliel Sarrenin that opened in 1938. Other structures include the Gothic-style Highwood Manor, which dates to 1841, and Seiji Ozawa Hall, a contemporary brick building with a barrel-vaulted roof by William Rawn Associates.

A popular summer destination, the Berkshires is well known for its cultural offerings. Other recent projects in the region include a wood-and-glass dance studio at Jacob's Pillow by Flansburgh Architects and an expansion of the Massachusetts Museum of Contemporary Art, or MASS MoCA, by Bruner/Cott.

Photography is by Robert Benson.