Angled windows in deep reveals zig-zag across the elevation of Bennetts Associates' brick and concrete home for the Royal College of Pathologists in Aldgate, London.

The new headquarters, which occupies the site of a demolished 1980s building, marks the final step in the college's move from its heritage listed buildings in St James' in central London to contemporary premises.

The brief called for a variety of functions, providing educational areas, workspaces and social spaces, as well as areas for exhibitions and meetings. In response to this, functions have been split between floors, creating a "layer-cake" of uses, linked by bright, open voids.

"The large double-height reception space can host public exhibitions and events while the full-height windows at ground floor level create transparency and a sense of openness for the public," said the studio.

A concrete frame provides the structure of the building, with a single core housing stairs, lifts and bathrooms.

"The structure features large spans and few columns for built-in flexibility, while a variety of materials and techniques add texture to the internal spaces," said the architects.

Coffered concrete ceilings have been installed to help create a feeling of height within deep-plan areas, and areas of full-height glazing help to draw light into the interiors. 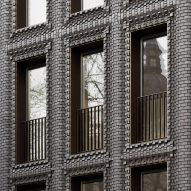 While the upper levels contain rooms that are more enclosed, the lower areas that are accessible to the public have been kept as open as possible.

At the sixth-floor level the building steps back to create an "open plan pavilion" giving panoramic views out over London.

A textural palette of board-marked concrete, walnut, perforated brick walls and mild-steel staircases is intended to "reflect the character of the Royal College", working with elements of the structure to evoke its former headquarters in St James'.

"A deep load-bearing brick facade marks the entrance on Alie Street with tapering brick piers creating a substantial presence which hints at the classical order, scale and hierarchy of the College's former headquarters in Nash Terrace," said the practice.

With flexibility being a key concern, all of these materials were chosen for being largely self-finishing and requiring little maintenance, creating a robust shell that can be easily altered in future.

Bennetts Associates' Royal College of Pathologists has been longlisted in the 2019 Dezeen Awards. Previous projects by the studio include the conversion of an art deco cinema into the Storeyhouse in Chester, as well as a renovation of London's Shaftesbury Theatre, which included the addition of a serrated, weathered steel-clad extension.