The roof of City Gallery Wellington is now home to a "kinda creepy" five-metre-tall sculpture of a hand with a face called Quasi, by New Zealand artist Ronnie van Hout.

The hand, which stands on two fingers and features an unsmiling face, was winched onto the roof of the gallery yesterday by helicopter. It is scheduled to remain in place for up to three years.

Made from steel, polystyrene and resin, the hand is named Quasi, after Quasimodo, the Hunchback of Notre-Dame in French author Victor Hugo's 1831 novel of the same name.

The back of the hand features a face described by City Gallery Wellington as a "partial self-portrait" of Van Hout.

"The giant hybrid face-hand is based on scans of the artist's own body parts," said the gallery. "It's as if the hand of the artist has developed a monstrous life of its own."

The gallery tweeted to announce the public sculpture's arrival on Monday: "Is it a bird? Is it a plane? No – Quasi has landed!", but it has received a mixed reception.

Responding to the tweet, members of the public described the hand as "really ugly" and "kinda creepy".

Is it a bird? Is it a plane? No—Quasi has landed! This morning, Ronnie van Hout’s Quasi was installed on our roof. Quasi is a joint project with Wellington Sculpture Trust, with support from Wellington City Council, Wellington Community Trust, and Richard Burrell. pic.twitter.com/9MaHc9gB71

Quasi previously perched on the roof of the Christchurch Art Gallery on New Zealand's south island since 2016 to mark the 2011 Christchurch earthquake, before taking up its position at City Gallery Wellington this week.

Built in 1940, the art deco building used to house Wellington's public library until it was converted into an art gallery in 1993. The building is on the city's Civic Square, which the gallery said had been "largely abandoned" after the 2016 earthquake in Wellington.

Christchurch Art Gallery described his hand sculpture as "a surreal piece of visual fun" that "plays with the idea of the artist's hand as the source of his or her genius".

According to curators at its new home, the artist's work explores "the freak, the outsider, the reject".

Referring to the sculpture's namesake, the gallery said: "Misshapen and misunderstood, [Quasimodo] turned out to be a great tragic-romantic hero – a beautiful soul." 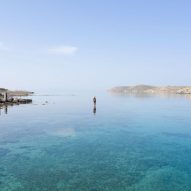 "Will [the sculpture] find a home in the capital? Can Wellington see beyond appearances?" it continued.

Another artist well-known for his humanoid sculptures is Antony Gormley, who recently installed 29 figures across the Greek island of Delos in an exhibition called Sight. The figures appear amongst ancient ruins, at the edge of the water and standing in the sea.