Artist Antony Gormley has unveiled Sight, an exhibition of 29 of his humanoid sculptures on the Greek island of Delos in the Aegean sea.

British sculptor Gormley, creator of the Angel of the North, has installed the forms across the island taking advantage of both the scenery and ruined ancient Greek and Roman architecture.

"In this atmosphere of light there is a feeling of timeliness, of being outside industrial time," said Gormley.

"Sculpture is a threshold to another attitude to time; it provides the invitation to escape mechanised time as we know it."

The figures are displayed across the island, including among ruined ancient columns, at the centre of an amphitheatre, at the water's edge and standing in the sea.

One of the figures from Gormley's 1999 – 2013 series Another Time has been placed at the rocky edge of the island, with two more from that era perched on Plakes Peak and on Mount Kynthos.

Other sculptures have been placed amongst the ruined remains of ancient merchant stores, with another displayed in the Archaeological Museum of Delos.

Delos, the mythological birthplace of the sun god Apollo and Artemis, goddess of the hunt, is a three-mile-long granite outcrop in the middle of Cyclades archipelago that is one of Greece's most important archaeological sites.

The ancient Greeks made Delos a cult centre for the worship of Apollo and Artemis between 900 and 100 BC, although the ancient stone huts on the island date from the third millennium BC. Under the Romans the island became a free port and the site of one of the region's largest slave markets. 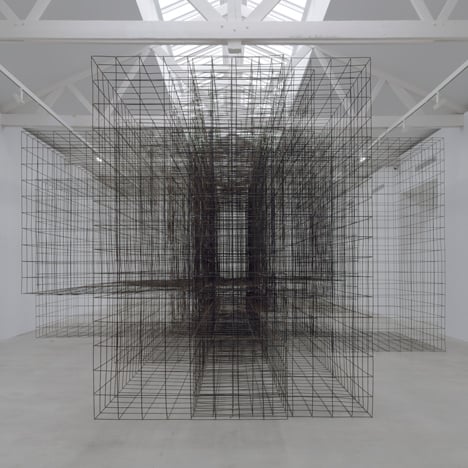 Changes in trade routes saw Delos' importance decline and by 69 BC it was abandoned. The island has been uninhabited for over 2,000 years apart from the archaeologists who safeguard and study its historic sites.

The project was organised in collaboration with the Ephorate of Antiquities of Cyclades. Sight was curated by director of the Whitechapel Gallery Iwona Blazwick and Neon director Elina Kountouri.

The exhibition, which is accessible via boat from Mykonos, Paros and Naxos Islands, is on display until 31 October 2019

Photography is by Oak Taylor Smith, courtesy Neon, Ephorate of Antiquities of Cyclades and the artist.