Designer Zhekai Zhang has developed a method of staining porcelain with used coffee grounds to mimic the texture of marble, and applied the technique to a collection of lamps called Coffire.

The lamps are one of 261 design projects that have been longlisted for Dezeen Awards 2019.

The Coffire project grew out of a commercial commission to promote a coffee drink, leading the Chinese designer to conduct research into ceramic firing techniques.

After learning how much coffee waste is generated each year, Zhang started to think about how the grounds could be reused.

"At least 400 billion cups of coffee are consumed worldwide each year, producing at least eight million tons of coffee grounds," he said.

"Most coffee grounds are discarded, thrown in landfill or incinerated along with other waste. The disposal of coffee grounds as waste not only consumes a lot of energy, but also harms the environment."

Zhang, who graduated from the Royal College of Art last year, used a gas kiln instead of a traditional sand pit to allow the lamps to be mass-produced while avoiding the high waste rate involved in pit firing.

According to the designer, natural coffee grounds are safer than the toxic metals used to colour ceramics in ancient pit firing, the oldest known method for firing pottery.

Zhang fires the lamps at between 700 and 1000 degrees celsius, which is a relatively low temperature for ceramics.

During firing the coffee grounds release biodiesel and sugar, which interact and oxidise to create the marbled red colour. 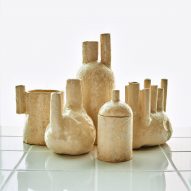 The random surface texture and pattern is a result of variables such as temperature, humidity and the density of the coffee grounds.

"Due to the innovative colouring technology, the Coffire lamp has a pink marble-like surface texture; an effect that no other glaze can achieve," explained Zhang.

"The texture and colour produced through this firing technology are different, making each lamp unique."

The designer has set up a studio called Kae with fellow RCA alumni to commercialise the idea.

Another designer to experiment with waste materials as a glaze for ceramics is Agne Kucerenkaite whose Ignorance is Bliss project repurposed industrial metal waste to be turned into powdered dyes to colour porcelain tableware and ceramic tiles.

Meanwhile, Sinae Kim used human urine to glaze a series of pots inspired by the shape of the human bladder and laboratory equipment.