A farmhouse hotel in South Africa's Cape Winelands has opened a plant-filled dining space, designed by Malherbe Rust Architects to pay tribute to the history of the spice trade.

The Spice Garden is the latest addition to Babylonstoren, a hotel and wine estate that occupies a Dutch farm dating back to the 17th century.

The greenhouse creates an intimate dining space where guests can sample foods infused with different spices, while also learning about the historical value these spices once held.

In a time before refrigeration, sailors travelling to the east in search of these spices would be plagued by scurvy, thanks to a rancid diet of meat, cheese and fish preserved with salt. So a small settlement was established in 1652 at Table Bay, on the southern tip of Africa, with a garden that could supply passing ships with fresh produce.

"Our newly acquired Spice Garden tells the tale of the ancient spice trade with the east," explained Terry De Waal, CEO of Babylonstoren.

"Guests will feel the rise in temperature and humidity, and learn about spices and the story of the spice route around the Cape of Good Hope around the 17th century."

Malherbe Rust Architects, a studio based locally, designed the building as a simple steel-framed greenhouse with a gently arching roof.

The glazing is polycarbonate plastic, chosen as it helps the building retain heat and protects the plants from UV rays.

A wooden deck is surrounded by sunken planting areas, as well as a heated pond that raises temperature and humidity levels.

This pond, as well as two aquariums, contain exotic fish from tropical Asia including the zebrafish, the tinfoil barb and the bala shark. 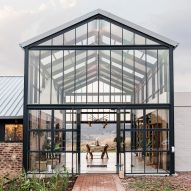 "The mechanics of heating cooling, humidity control and hot-house design was done by us to cater specially for the chosen plants," explained De Waal.

The centrepiece of the space is an eight-metre-long granite dining table with water running down its centre from a brass tap at one end to a spout at the other.

It provides space for up to 24 people to dine together, sat on simple wooden benches.

"Water runs continuously over the length of the table and splashes into a big pool of water under the sitting deck," said De Waal.

Babylonstoren first opened its restaurant and guest suites in 2010, and started producing wine shortly after. Since then it has added a range of facilities including a garden spa and hammam, and a snaking wooden path called the Puff Adder.

Like in the Spice Garden, all the plants growing in the estate's gardens are either edible or of medicinal value.