Mexican designer Norberto Miranda has designed inflatable structures that look like massive beans to host an exhibition that celebrates the traditions and intersection of Mexican gastronomy, music and culture.

Norberto Miranda and architecture firm Estudio 3.14 created the structures for a travelling exhibition called Tierra Fértil, which translates as Fertile Land. The inflatable design means that the structures can easily be moved around.

The team chose the bean shape because of the foods importance in Mexican culture and the Mesoamerican agricultural practices. Each plastic structure is 550 square feet (51 square metres) and features the distinct patterns and colouring based on three bean varieties.

Large white and black patches cover the exterior of the "little cow bean", tan skin speckled with brown spots wraps the "june flower", and the "may flower" bean is coated with a purple-brown and peppered with dozens of tan markings.

"The whole experience is designed as a prêt-à-porter piece that meets travelling informal commerce, tianguis, Mexican marketplace, culture," Miranda said. "Its own constitution is a mix of different traditional jobs with their own creative input, resulting in a pop culture driven project."

The first showcase of Tierra Fértil took place in the village of Papalotla, México as part of a 10 day festival for the 2018 annual Death Day celebration. It is now set to travel across the country.

The interiors of each structure are intentionally blank to allow for installation of the exhibition.

Laura Bordes developed the educational material housed inside of the inflatables. The activities are curated to teach visitors of all ages about the science of music, the history of popular Mexican music genres and the connection lyrics have to life themes, such as love and death. 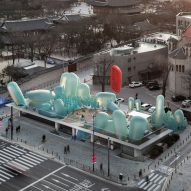 "The images express the basic information of these songwriters’s bios within an "underground" visual culture, that could be more appealing to young audience," Miranda said of the artist's work.

Romero's piece called The Constellation allows visitors to improvise with making music. LED lights installed in the space detect the motion and volume of sounds and instruments being played and adjust their brightness accordingly to teach patrons about the science of acoustics.

Over 4000 people visited the first showcase of the exhibition in Papalotla, Mexico, a town with a population of 3800. There was a second installation in Xochimilco, Mexico City. Plans are now in place to bring it to other Mexican states.

Playful inflatables have become increasingly popular among architects and designers. Other installations that have made the most of blow-up structures include a rooftop garden in downtown Seoul by Moscow studio SKNYPL and David Shrigley's collection of swans that collapse and re-inflate every 12 minutes.

Photography is by Norberto Miranda, unless stated otherwise.