New Korean Garden is an "Instagrammable" meeting and events space proposed for a rooftop in Seoul, South Korea, which is made from turquoise, pebble-like inflatables.

Designed by Moscow studio SKNYPL, it is envisaged as a contemporary interpretation of a traditional Korean garden, within which simplicity and nature are typically key, and rock arrangements are considered crucial elements.

The design was entered into an international competition that invited designers to transform the roof of Seoul Hall of Urbanism & Architecture into a publicly accessible space offering a "unique pastime experience".

"[New Korean Garden] personifies the Korean garden, explores it and gives it new meanings. Its colour and shape evoke associations with plants, stones, and hills, which form the basis of the theory of harmony in the Korean garden," explained the studio.

"There you can gather in a group and talk in a relaxed atmosphere, retire and read a book, lie down and watch the city from the outside, come with children and give them a playground for playing in the city centre." 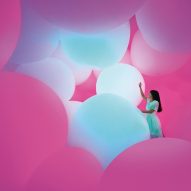 SKNYPL's priority for its proposal for New Korean Garden was to create a multifunctional space that had an instantly recognisable character, while also being easily reconfigurable and made from sustainable materials.

To achieve this, the proposal consists of an abundance of different-sized inflatables constructed with ETFE – a fluorine-based plastic that is recyclable. These are then filled with air.

While giving the New Korean Garden its unique "Instagrammable" aesthetic, these ensure the pebble-like forms are light and mobile.

The space can therefore be easily transformed from a labyrinth of meeting spaces in the day into a more organised event venue in the evening.

"The garden and space of ceases to be inert; it becomes a living organism that changes over time," explained the studio.

SKNYPL's design also incorporates a series of smaller "flying elements" – inflatables that are filled with helium and attached to the site.

These are designed so that the inflatable landscape can be seen from all around Seoul, while also doubling as billboards used to advertise exhibitions and events taking place there.