Pritzker Prize-winning architect Kazuyo Sejima has designed the Laview commuter train with huge passenger windows and a curved glass nose, which is now in operation between Tokyo and Saitama.

The trains designed by Tokyo-based architect Sejima, who heads up SANAA with Ryue Nishizawa, have been running on the line between Tokyo's Ikebukuro station and Chichibu in neighbouring Saitama prefecture since earlier this year.

Sejima said that she was asked to design a "as never seen before", and opted for the curved design with giant windows for passengers to enjoy the view.

"This is my first time to design a train and the most obvious difference with building design is that the train can move to different places," explained Sejima.

"This train moves through the city to the mountains of Chichibu and I thought it would be nice for the train to be able to respond and blend into the surroundings in a soft way," she continued.

Windows are placed along each carriage at regular intervals. Each passenger window is 135 centimetres by 158 centimetres and the bottom of each pane falls well below the usual point on regular commuter trains, to allow passengers to enjoy "large panoramic views".

Each train has eight cars, with a total capacity of 422 seats. Sejima has designed both the design concept, exterior and interior of the carriages, with sofa-like seats upholstered in a bright yellow material.

The upholstery for the carriages was designed in collaboration with textile designer Yoko Ando. Each seat has an adjustable headrest and a table within the armrest. 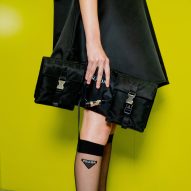 Walls of the carriages are white to contrast with the warm yellow seats that wrap around the passenger.

Sejima intended the carriages to make the passengers feel relaxed, as if they were at home rather than travelling on public transport.

"I wanted to make a train which feels like a living room where passengers can freely relax and feel motivated to ride the train," she explained.

Lighting in the carriages is deliberately soft and indirect from the train's vaulted ceiling. Sejima collaborated with Shozo Toyohisa on the lighting, which adjusts throughout the day to create the most relaxing atmosphere depending on the time of day.

The entrance to each carriage is designed in warm yellow tones with an artificial marble floor.

The mirrored exterior was created with an aluminium paint specially developed for the Laview train. The degree of reflection that the exterior surface would offer "was carefully studied to show a new impression of the scenery".

The "soft impression" of the front of the train was made by installing a 1.5-metre-wide curved glass panel, the first of its size in Japan.

Designed to celebrate the 100th anniversary Seibu – the operator that runs the line – the train's name is an acronym. L stands for "a space reminiscent of luxurious living", A is for "speedy like an arrow", whilst view is for the "views through the large windows".

Seibu plans to replace all seven trains that travel the 60 mile track between the two stations with the new trains by the end of 2019.

As well as designing the train, Sejima recently branched out from designing buildings by creating a multi-functional bag for Prada called The Loop.

The bag winds around the wearer's neck and is adorned with playful pockets in pale pink, blue, yellow and white.