A geometric pattern of glass reinforced concrete slats covers the exterior of this housing block in Málaga, which has been designed by Muñoz Miranda Architects.

Named the The New Brick Tectonic, the block designed by Spanish practice Muñoz Miranda Architects has been longlisted in the 2019 Dezeen Awards.

One of a series of buildings created to rejuvenate a post-industrial seaside strip on the Mediterranean coast in Málaga it contains 73 apartments.

The architecture studio used a 20th century smokestack on the site – the only remnant of its industrial heritage – as the starting point for their design.

The facade is made from panels of glass reinforced concrete (GRC) that are designed to appear as if they have been pushed and pulled "as though sculpted from clay". 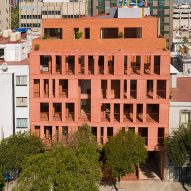 "The project had the challenge of combining trendiness, tradition and respect for the nearby heritage of the industrial chimney," explained the studio.

"It proposes a materiality in dialogue with [the smokestack], but using bricks with a different technique, assuming a new contemporaneity and forming an abstract and massive facade in lightened prefacticated concrete".

The apartments have been stacked around two large atriums that cut through the entire height of the building.

"The material massiveness is organised as stacked elements, as if they were containers made of corrugated metal sheets like those of Málaga's port," said the studio.

Lined with white corrugated PVC sheets, each atrium is surrounded by an open corridor providing access to the apartments at each level.

At the building's perimeter, the blocks of the apartments protrude to create balconies and terraces, giving views out to sea as well as of the nearby town and the adjacent smokestack.

In the apartments' bathrooms and kitchens, the slats of the facade's outer skin act as ventilation grilles, allowing air to circulate through the apartment and out in to the atriums.

Underneath the block is a parking area accessed via a ramp that sits behind one of the facade's panels, with a darker materiality of concrete, black granite and corrugated metal.

Granda-based Muños Miranda Architects was founded by Alejandro Muñoz Miranda. Previous projects include an educational centre in El Chapparal with a facade animated by multicoloured openings.