The trio created the designs for the surroundings of live-dig area La Brea Tar Pits, which formed over thousands of year as tar leaked from the ground onto the surface, where it dried and preserved the remains of animals that lived there.

Dorte Mandrup, Diller Scofidio + Renfro and Weiss Manfredi are spearheading three teams that are shortlisted in a competition organised by the managers of the 12-acre site, the Natural History Museums of Los Angeles County (NHMLAC).

The project, which marks the first update to the tar pits in over 40 years, aims to reinvigorate the historical site, develop the surrounding Hancock Park and expand facilities in the George C Page Museum, which was completed in 1977 to display paleontological findings.

Among the main challenges of the project is updating the museum building, which is partially burrowed underground, making it difficult to expand.

In Danish firm Dorte Mandrup Arkitekter's scheme, the building is extended to follow the original aesthetic but include a rooftop garden, new daylit galleries with views to the surroundings, and a research core at the centre.

"Our proposal interweaves the park and museum, so the moment you step inside the park you become immersed into the story of the tar pits," said studio founder Dorte Mandrup, whose team comprises Martha Schwartz Partners, Arup, Gruen Associates and Kontrapunkt.

"A visit here should be a journey of curiosity, where senses and imagination are instantly awakened," she added.

"Our hope is that this will bring visitors much closer to the world of natural science, and in turn heighten their understanding of the past, present and future of our planet," said Mandrup.

Diller Scofidio + Renfro – along with Hood Design Studio, Rana Creek Design, Nabih Youssef Associates and Arup – maintains the existing footprint of the museum. A huge glass volume would be inserted inside to host the collection, with exhibitions and circulation arranged around it.

"We have taken a 'light touch' approach for the next evolution of the Page Museum, infilling underutilised spaces and reconfiguring what is already there to create a more dynamic and efficient hybrid structure that is both building and landscape," said Diller Scofidio + Renfro.

Its proposal suggests overlaying a gridded network across the site, drawing on the shape of a tool commonly used for digging. The structure will provide a framework for developing the site in portions in the upcoming years.

It has also included a moveable "dig rig" that can be easily transported to different areas of the site and suggested carving a sloped plaza to lead into the Page building.

"A revitalised Hancock Park is conceived to be the connective tissue between existing and new institutions, public spaces, and urban infrastructure," it added. 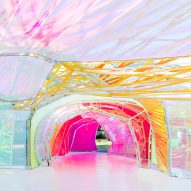 Called La Brea Loops and Lenses, Weiss Manfredi's design focuses on a one-kilometre-long pathway that loops across the site. Along the route are platforms for visitors to view excavation and framed vistas of the museum.

"The lenses, as framed views throughout the park and museum, reveal the La Brea collection to visitors, bringing the museum to the park, and the park into the public imagination," they added. "We are excited to reimagine La Brea and are committed to amplifying this enduring Los Angeles landmark to serve a vibrant community."

The American firm's concept rearranges the museum to create panoramic laboratories arranged in a loop around the "exhibition pit".

NHMLAC invited Dorte Mandrup, Diller Scofidio + Renfro and Weiss Manfredi to assemble teams and formulate ideas for the redevelopment in March this year. Initial concepts were developed during an incubator held in June.

The recently unveiled proposals are on view at the tar pits museum until 15 September, with the public invited to offer feedback online during this time.

The La Brea Tar Pits redevelopment forms part of major effort to rejuvenate the site as a cultural hub for the city, which NHMLAC has spearheaded to coincide with Peter Zumthor's extension of the nearby LACMA.