An underwater internet of things monitoring the effects of climate change or sampling waters on distant planets is the dream of a group of MIT researchers who have created a battery-free underwater sensor.

The sensor is part of a communications system that avoids a key problem with underwater electronics, which is the pollution from the use of batteries.

Instead, the sensor harnesses two technologies: for energy, there's the piezoelectric effect, where vibrations in certain materials generate an electrical charge.

And for transmitting data, there's backscatter, which involves reflecting wireless signals back to a reader, and is commonly used in radio frequency identification (RFID) tags.

With these two methods combined, the almost-zero-energy system could operate for a long time with minimal human intervention.

The sensor doesn't require any batteries to function underwater

Its creators at the Massachusetts Institute of Technology (MIT) have dubbed it the Piezo-Acoustic Backscatter System, and detailed their findings at last week's SIGCOMM conference in Budapest, where they won "best paper".

The paper's co-author Fadel Adib said he had been inspired to start work on the system while watching the documentary series Blue Planet.

"It occurred to me how little we know of the ocean and how marine animals evolve and procreate," he said.

Observation is limited in part because Wi-Fi and Bluetooth signals can't be used under water: "And you don't want to put batteries all over the ocean, because that raises issues with pollution," he added.

The system would enable better monitoring of marine life and ocean temperatures — factors integral to better understanding climate change and predicting the rise in sea levels.

It also presents the opportunity for testing on other planets.

"How can you put a sensor under the water on [Saturn's moon] Titan that lasts for long periods of time in a place that's difficult to get energy?" said Adib. "Sensors that communicate without a battery open up possibilities for sensing in extreme environments."

The piezoelectric effect works because the sensors are made from a material that can transform pressure waves into electricity. When sound hits the sensor, it vibrates, generating the electricity that powers it.

Transmitting data usually requires a lot of power, but the system gets around this by using backscatter, which takes advantage of existing sound waves rather than generating new ones.

It changes to either reflect or absorb those sound waves, sending them towards a receiver that interprets it as binary code, the same as a computer. 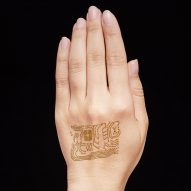 The system's transmitter and receiver still require a power source, but they can be placed on ships or buoys where batteries are easier to replace.

Another recent project from MIT also realised an alternative form of sensor technology — plants. The university's "cyborg botany" researchers altered a Venus flytrap to receive signals and operate as a motion sensor.