The Massachusetts Institute of Technology's "cyborg botany" researchers have turned plants into sensors and displays, suggesting we use them as a gentle alternative to electronic screens.

Harpreet Sareen and Pattie Maes from the MIT Media Lab's Fluid Interfaces Group have been researching how to merge plants and artificial electronics to create new interfaces.

"Plants are normally thought of as passive creatures in the environment," said Sareen. "Contrary to this, they can not only sense what's happening around them, but respond and display naturally."

"Through cyborg botany, we power some of our digital functions with the natural abilities of plants."

Plants developed that can communicate

The team's two new projects, titled Phytoactuators and Planta Digitalis respectively, focus on human interaction. They use plants for sensing and display — the two essential elements that complete an interaction loop.

This means that a person can tell a plant to do something, and the plant can also communicate some information back.

They build on Sareen and Maes' previous project Elowan – a plant-robot hybrid powered by the organism's need for light.

For the first project, Phytoactuators, the researchers connected electrodes to several key spots on a Venus flytrap and a Mimosa pudica. This allows the plant to receive signals.

Through an accompanying app, users can watch a live stream of the plant and click on its on-screen leaves to trigger them to close in real life.

Plants could be used to send notifications

The researchers suggest this functionality could be used to send people notifications, in effect turning the plant into a display. A jiggle from the stem or an arrangement of closed leaves might indicate rain outside, the arrival of a package or some other simple information.

In the second project, Planta Digitalis, the researchers grew a conductive "wire" inside the plant by sitting it in the water-soluble polymer ProDOT. They could then connect this wire to other instruments, turning the plant into an antenna or sensor.

They suggest that with this functionality, the plant could be an inconspicuous motion sensor, sending an alert to people when it detected intruders or wayward pets.

Interactions could be less intrusive than digital displays

Sareen and Maes noted that while such displays and sensors were simple compared to our phone screens and other everyday electronics, it was easy to imagine cases where this simplicity would be welcome.

"Our interaction and communication channels with plant organisms in nature are subtle – whether it be looking at their colour, orientation, moisture, position of flowers, leaves and such," said the researchers. "This subtlety stands in contrast to our interactions with artificial electronic devices that are centred in and around the screens, requiring full attention."

"We envision bringing such interaction out from the screens back into the natural world around us." 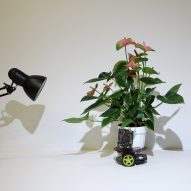 The researchers also noted that it could be advantageous to use plants, which are already pervasive, rather than manufacturing whole new objects.

"Plants are self-repairing, self-regenerating organisms available at scale," they said. "Through Cyborg Botany, we envision a convergent design world in which we reappropriate our natural capabilities for a new bio-interaction design."

Their mission has some overlap with the more established approach of biomimicry, which focuses on replicating natural processes for efficient design, such as in the University of Stuttgart's architecture based on sea urchins and beetle wings.

With cyborg botany, the goal is to use the biological processes of living plants and merge them with artificial electronic functionality. Others working to harness natural biological processes in this way include EcoLogicStudio, whose algae building facades is designed to purify the air.