The moquette designs that Kirkby chose to draw upon in the archive come from the 1930s through to the present day.

Derived from the French word for carpet, the term moquette is used to describe a hardwearing woollen fabric made using the jacquard weaving technique.

Famous for being used across London's transport network, the fabric was first applied to the city's public transport seating in the 1920s, and soon after became popular in home furnishings.

After being struck on his commute by the bold design of the tube seating "in a way that he had never previously noticed", Kirkby's creative director Jordan Mould decided to approach Transport for London (TfL) to start the project. 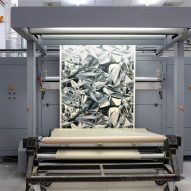 The resulting collection saw the studio rework previous and current designs used on London Underground tube lines from the past 90 years.

These include the Northern, Hammersmith, Central, Metropolitan, Bakerloo and Piccadilly lines. The brand also adapted the Pullman design first seen on London trams during the 1930s.

"London Underground is an iconic symbol of British culture," said Mould. "To be involved in its rich design history is very exciting for us."

"We are very proud to be part of TfL's design heritage and bring this to a wider audience," added the designer.

Each of Kirkby's designs has been given the name of the London Underground line that the moquette was most predominantly used on – even when it appeared on other lines too.

"The London Underground is recognised around the world as a design icon and throughout its history has set many trends when it comes to architecture and design," said Julie Dixon, head of customer information for design and partnerships at TfL.

"This renewed partnership with Kirkby showcases patterns inspired by our historic and much loved moquette designs, which will hopefully fill the gap in any front room or social space," Dixon continued.

Kirkby's design in response to the Northern line takes cues from the moquette created around 1965 by British textile designer Marianne Straub, which was widely used on the Northern, Piccadilly and Bakerloo Lines, as well as on London buses.

The studio has overhauled Straub's design, made up of overlapping straight lines, to change its blue and green hues into five different colourways, from a red and purple-hued Blackcurrant style to a light brown and cream-coloured Biscuit version.

The Central range of patterns is an adaptation of the moquette designed by Enid Marx around 1938, which was soon after used to re-upholster seats on overground transport links, as well as on Piccadilly and Central line tube trains.

Kirkby has stripped the original version down, leaving a series of simple, arrow-shaped designs in four different colour combinations including Monochrome and Burnt Orange.

The Underground Vol. II collection has been created in time for this year's London Design Festival, and will be launched as part of the 100% Design event that takes place from the 18 to 21 September 2019.

The range of fabrics will be presented in an installation that sees an original 1967 decommissioned Victoria line tube carriage reimagined as a colourful furniture showroom.

The collaborative project saw Kirkby and Dixon transform photographs of textured materials such as foil, hair and charred wood into a series of five digitally printed textiles.