The lighting collection, called Strand, comprises four simple pendant lamps made using a fibrous polymer material that is sprayed over a lightweight steel structure to form a "cocoon".

This process of shrouding the metal frame is designed to emulate the act of silkworms "self-wrapping".

Once the cocoon-like material has hardened, it envelops the light source and acts as its diffuser.

For Strand, Layer wanted to create a series of lights that boasted "expressive yet simple" contemporary forms, while also using as little materials as possible.

Each lamp boasts a large volume and a minimal material impact – the outer fibrous material is very thin yet robust, just like the steel framework it coats.

The collection will launch during this year's London Design Festival, taking place from 14 to 22 September 2019.

Not only is this is the first product designed by Layer for Muuto, but Hubert is also the first British designer to work with the Scandinavian brand.

"We strive to create design that improves the emotional healthiness of the user and enhances or at least reflects their lifestyle," said Layer. 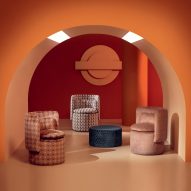 "As a brand, [Muuto] are aligned with our ambition to create simple and accessible design that can be owned by many and seamlessly integrated into the home," added Hubert.

"With Strand, we have created a collection of softly voluminous pendant lamps that exude gentleness and sensitivity," he continued.

Each lamp in the collection took design cues from the "softly rectilinear" forms commonly used in factory lighting, which contrasts the "domestic" feeling of the woven material.

Layer opted for a neutral colour palette to further adapt these typically industrial forms to suit a wider range of interior environments, including home, hospitality and commercial settings.

Strand includes four different sizes and shapes, which can be hung individually or assembled together to create a "statement" light installation.

The collection will be launched at the Muuto space on the second floor of Heal's furniture store in Bloomsbury during this year's London Design Festival, in an installation also designed by Layer.

Designed to reflect the simplicity and materiality of the product, the installation sees a translucent curtain material draped over the room's large windows, to create the impression of being inside one of the Strand lamps. 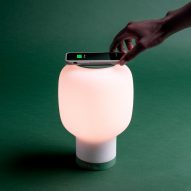