Seeing Spheres was unveiled this week at the city's Chase Center sports complex. It is Eliasson's first permanent public work on the west coast, and his largest public work in the US.

The installation comprises five globes made of polished hydroformed steel. Each is 15.5 feet (4.7 metres) high, with a diameter of 15.5 feet (4.8 metres).

Arranged in a circle, the orbs enclose a concrete square at the east entrance plaza of the sports arena, which is home to US professional basketball team the Golden State Warriors.

"Seeing Spheres offers a place to pause, where you see yourself from the outside, as a participant in society," Eliasson said.

Each orb is also fronted with a flat circular mirror ringed by LED lights that Eliasson has arranged to face inwards. When lit up, the lights are reflected in the surrounding circular faces and create the appearance of a tunnel.

"Seeing Spheres is a public space that contains you and contains multitudes," Eliasson continued. 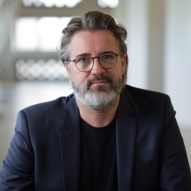 "We often think of public space as empty, negative space in the city, viewed from a car or crossed on the way to somewhere else."

Seeing Spheres launched ahead of the opening of Chase Center on 6 September. Architecture firms MANICA Architecture and Gensler teamed up to design the complex to host a basketball arena and a concert hall.

In addition to Eliasson's installation Seeing Spheres, Chase Center also commissioned 33 artists to create works for display inside the arena. A mobile sculpture by Alexander Calder and Isamu Noguchi's Play Sculpture will also be loaned to Chase Center.

Eliasson's installations often play with cognizance, with examples including an immersive light installation at Frank Gehry's Fondation Louis Vuitton building in Paris that aimed to skew viewers' perceptions of space.

He is also currently showcasing nearly 40 pieces of work in a major Tate Modern exhibit in London, Olafur Eliasson: In Real Life.

In interview with Dezeen earlier this year, the artist discussed how pieces such as the water-and-rainbow filled rooms are intended to prompt visitors to look at the world from a different angle.