The Lamborghini Sián is the Italian automaker's first hybrid supercar to go into production, boasting an electric powertrain that makes it the "fastest Lamborghini of all time".

Unveiled ahead of the Frankfurt Motor Show 2019, the Lamborghini Sián is the car maker's first hybrid model to go into production.

With a 785 horsepower V12 engine and a 34 horsepower electric motor, the hybrid model produces a combined thermal and electric power of 819 horsepower (602 kilowatts).

According to the company, this makes it the most powerful Lamborghini ever produced.

While Lamborghini has teased conceptual electric sports cars such as the Terzo Millennio, the new hybrid car marks a significant step on the company's drive towards electrification.

"Not only does the Sián deliver a formidable hyper-car design and engineering tour de force today, it augments the potential for Lamborghini as a super sports car brand for tomorrow and for decades to come," said Lamborghini CEO Stefano Domenicali.

"As hybridisation becomes more desirable and inevitably essential... the Lamborghini Sián represents the first step in Lamborghini's route to electrification, and expedites our next-generation V12 engine," he added.

The Sián includes the "world's first" application of a supercapacitor for hybridisation, developed to store 10 times the power of a lithium-ion battery.

Weighing in at just 34 kilograms, the Sián's powertrain is able to accelerate from zero to 62 miles per hour in under 2.8 seconds, offering the lowest ever weight-to-power ratio of the Lamborghini V12 family.

It can reach a top speed of over 217 miles per hour, earning its name Sián, which translates to "flash" or lightning" in Bolognese dialect.

Taking futuristic design cues from the Lamborghini Countach in its sharp, sculptured shape, the Sián model boasts an "uncluttered" form, but introduces new features such as its characteristic aero wings.

The rear of the vehicle features the hexagonal design that Lamborghini is known for, including six hexagonal tail lights inspired by the Countach.

The car has a low front with an integrated carbon fibre splitter on the front bumper, which is accompanied by Y-shaped headlights, originally designed for the Lamborghini Terzo Millennio. 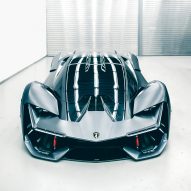 Active cooling vanes are also incorporated onto the car's rear, which start to work once the vehicle's smart-material elements respond to the temperature generated by the exhaust system, causing them to rotate and cool the car down.

A limited series of just 63 models of the Lamborghini Sián are being produced, in honour of the company's founding year, 1963. Each of the 63 models will be individually styled by its owner to make each one unique.

"The fastest Lamborghini must be a visual and symphonic feast, as remarkable to those who see it pass by as those privileged to drive it," said Lamborghini's head of design, Mitja Borkert.

"It takes inspiration from the Countach, but the Sián is a futuristic icon, not retrospective," he continued.

"Exclusivity is enhanced by total Ad Personam personalization that every one of the 63 Sián owners has the privilege of creating, in conjunction with me and the Centro Stile team: 63 individuals worldwide will own not only the fastest, but a unique Lamborghini," Borkert added.

The Lamborghini Sián has been released in time for the Frankfurt Motor Show 2019, which will be taking place in the German city from 12 to 22 September 2019.

The specifically designed configuration for the car on display at the event features a green body with electric gold details. It has been painted with a multilayer colour containing golden flakes and golden crystals.

This colour palette complements the interior design, which is upholstered in aniline leather in the colour Terra di Sant'Agata Bolognese. The interior also features 3D printed parts for the first time in Lamborghini production. 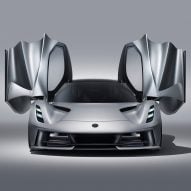 Lamborghini's move to electrification follows in the footsteps of companies like British car manufacturer Lotus, which launched its first fully electric zero-emission supercar in July 2019, called the Lotus Evija.