Dezeen promotion: Design China Beijing 2019 will feature over 200 exhibitors, showcasing furniture and lighting by emerging Chinese designers alongside a selection of international brands exhibiting in China for the first time.

The trade show will be double the size of its inaugural edition, which launched last year, and expects to receive twice as many visitors.

Taking place at the National Agricultural Exhibition Centre in Beijing from 12 to 16 September, Design China Beijing will focus on the themes of craft and sustainability this year.

These themes will be explored through a programme that includes an installation by Chinese architect Sun Dayong of Penda, as well as a series of talks and panel discussions.

"We are proud to return to Beijing this year with a bigger, more impactful presentation of Chinese and international design," said show director Tan Zhuo.

"For 2019, we are putting a spotlight on sustainability, because it has so strongly influenced contemporary design processes in China today and I want to distill this for our audience and use the fair as platform to celebrate our community's responsibility to the environment."

"We want Design China Beijing to become the platform that fosters design discourse and addresses the critical issues facing Chinese designers and brands today, while facilitating dialogues and exchanges between Chinese and international brands."

The show will feature work by a number of emerging Chinese design studios, including Above, which won the Emerging Chinese Designer Award at Design Shanghai earlier this year. 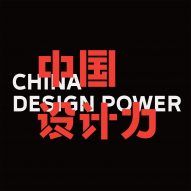 Other new Chinese exhibitors include lighting design studio The Shaw and Yemu 1978, a Hangzhou-based brand founded by a father and daughter, which specialises in wooden furniture.

They will be joined by more established names such as Frank Chou, who will present a new furniture and lighting collection at the show, as well as design brand 12 Hours and Chinese design store Cabana.

"Design China Beijing is the biggest design trade event in northern China and we hope it continues to serve as the biggest platform to engage with Chinese design and give China's established and emerging designers greater exposure," Tan told Dezeen.

Other international brands returning to China include Italian brands Natuzzi and Zanotta, which will be presenting pieces from throughout their 60-year histories.

Penda co-founder Sun Dayong will create an installation called Less Is Love in a large outdoor garden area, which will explore the architect's ideas about how to protect the environment.

A series of other installations by Liu Yongqi and Cao Feng will also be presented throughout the show.

As well as the exhibits and installations, the Design China Beijing Forum will host a series of talks and panel discussions exploring sustainability and craft in Chinese design.

According to Tan, she chose the theme of sustainability because she believes China will play an important role in helping to make design more environmentally friendly.

"As a big nation with 18 per cent of world's population, China can play a vital role in reducing human impact on the environment," she told Dezeen.

"If we can design smartly and efficiently using less resources, or using more eco-friendly resources, the contribution to the environment will be gradual but significant."

Design China Beijing 2019 takes place at the National Agricultural Exhibition Centre in Beijing from 12 to 16 September. Dezeen is a media partner for the event.