Heatherwick, whose Vessel structure sits on a raised plaza at the heart of the Midtown development, addressed criticism of his project and the wider development in a talk with Dezeen founder Marcus Fairs in Los Angeles last week.

"It's fine to not like it," said the British designer. "But the thing that should be appreciated is the ambition of people to say 'yes' to making ideas really happen."

Heatherwick also addressed the increasing involvement of private companies in the provision of new urban quarters.

Built with private money, Hudson Yards features a cluster of glass-clad skyscrapers surrounding an elevated plaza containing Vessel – a 16-storey object made up of a lattice of 154 staircases.

The Shed, an arts building by Diller Scofidio + Renfro, completes the 28-acre development, which is built over a working railway yard at the northern end of the High Line on Manhattan's West Side.

In New York, as in London, "government doesn't seem to be leading the development of pieces of city," Heatherwick said. "So it gets left to property developers to create majors pieces of city."

"We shouldn't underestimate what it takes," he added. "It isn't easy to do."

Hudson Yards has been widely panned by architecture writers, with Alan G Brake dismissing it as "a billionaire's fantasy of the future of city life".

In the same piece, Brake described Vessel as "a piece of urban costume jewellery, a gawdy bauble without purpose beyond shallow adornment".

The project has also been attacked for claiming ownership of all photos taken by visitors.

"This is NOT what public space should be," tweeted architect Adam Nathaniel Furman, one of many visitors to be angered by the rule.

Heatherwick hit back at criticisms of privately owned public spaces (POPS) such as Hudson Yards and Kings Cross in London, where he designed the Coal Drops Yard shopping centre.

"I think that it's possible to suspect the worst of the intentions of a property developer," he said. "But we've been lucky to work with a few who are very well-intentioned." 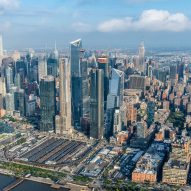 "What bothers many people is the sense of an alien culture"

Heatherwick's abandoned Garden Bridge proposal for London attracted similar criticism when it emerged that cyclists and groups of more than eight would be banned from the structure, which was to be built by a private charity.

Heatherwick said his team negotiates hard with clients to ensure projects are as public as possible, even when located on private land.

"With our projects, we try to get maximum porosity and public access, to make something as accessible as possible for as many people as possible."

Heatherwick was initially invited to propose a sculpture for Hudson Yards, an approach he dismissed as a cliched "turd in the plaza" approach.

Instead he adopted the approach of "don't do what people expect you to do" and came up with an idea based on Indian stepwells and which features 2,500 steps.

"It developed actually from looking at some of these stepwells in Rajasthan, and thinking about how could we make something that brought people together, but didn't block a space so that you could look at each other, as well as look out," he explained.

"So, could we make a room? And could we let you use your body to navigate that? And when we realised, you know, when did you last walk up 16 storeys?" 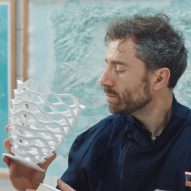 Thomas Heatherwick designed the Vessel to "bring people together"

"The whole point of a recreation space – what's precious – is that it doesn't tell you what you're supposed to do. So it's a different form of public space where you can do what you want."

Heatherwick was in conversation with Fairs at the Second Home Serpentine Pavilion at La Brea Tar Pits in Los Angeles last week. Organised by Second Home, the event is part of a series of talks to mark the opening of the shared-workspace brand's latest outpost in Hollywood.

A video of the conversation will be posted on Dezeen soon.

Photography is by Michael Moran, unless stated. Main image is by Epicgenius.