Set to open in September this year, Second Home Hollywood will mark the first US location of the British company, which provides studio and office space for creatives and entrepreneurs.

The 90,000-square-foot (8,361-square-metre) campus is expected to be the most progressive that architects José Selgas and Lucía Cano have created for Second Home, following the first in east London, the second in Lisbon and an outpost in London's Holland Park.

Circular yellow roofs will top each of the volumes, while walls will be formed of transparent acrylic to provide plenty of natural light and views outside. 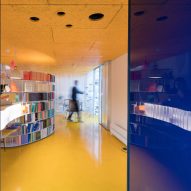 Winding pathways lead between the volumes to form connections between the units to encourage relationships – a key component of the Second Home enterprise. The large pockets left between the units will then be filled with thousands of plants and trees that are expected to grow above the roof canopies.

"It's the densest new planting in California," said Aldenton. "We're buying 6,500 plants, and having 400 full-size trees."

SelgasCano's other three Second Home venues similarly feature a close connection to greenery, for the company strives to promote health and wellbeing in the workplace. The LA hub, however, is intended to be the "most ambitious and bold version" of this, according to Aldenton.

"This is not just taking the city out of the way of nature and letting it live but actually playing a role in enhancing ecosystems and environments," he added.

They intend the unusual layout and offerings of the LA hub to be akin to the facilities available at the large complexes of major companies like Google and Amazon.

"Our job is to level the playing field between people like Google and someone who's just come up with an idea," Aldenton added. "Part of our role is like helping people concentrate on their work by creating great environments, helping them make really deep connections across communities."

Renderings show outdoor patios with wooden decks for companies to socialise and host meetings. The complex will also feature a branch of the company's bookshop called Libreria, a 200-person auditorium and post-production facilities.

In addition to these member facilities, Second Home Hollywood will feature a series of spaces that will be open to the public, including a restaurant, outdoor terraces, as well as meeting and spaces for cultural events. Local charities and neighbourhood groups will be able to use meeting rooms free of charge.