Engine noise, fumes and carbon emissions are all nonexistent with X Shore, one of the first electric boat-makers to target the consumer market.

The Swedish company manufactures all-electric boats, emphasising that the "power of silence" and lack of diesel engine fumes facilitates a deeper connection to nature.

X Shore launched its first boat model, the Eelex 6500, earlier this year, and rode it in UK waters this month during one of the most high-profile zero-emission sea voyages of all time — environmental activist Greta Thunberg's transatlantic trip to the UN Climate Summit in New York aboard the sailboat Malizia II.

The company said its boat "supported the safe departure" of Thunberg's solar-powered racing yacht from the port of Plymouth in the UK on 14 August.

The Eelex represents a step towards more sustainable sea travel, where the obstacles to the spread of electric engines include poor range, lack of charging facilities and slow speeds.

It can cover a distance of 100 nautical miles on a single charge, making it suitable for leisure boating. Its top speed is 40 knots — although to keep cruising consistently for two hours, the consistent speed would have to be a lower 25 knots.

Increasing the energy efficiency is the design of the deeply ridged hull, which X Shore says decreases friction by inserting air between the craft and the water. There is also a unique propulsion system developed just for the boats.

The company's CEO and founder Konrad Bergström, a serial entrepreneur, trademarked the X Shore name globally in 1996, a long time before the technology for electric boating was ready. 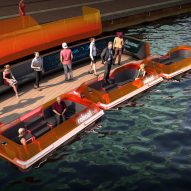 RoundAround dynamic "bridge" is made of autonomous boats

"I first had the idea in the nineties, but at the time, the technology to deliver this vision wasn't available," he said.

"Now that the technology has caught up, and the demand for sustainable mobility has skyrocketed, there has never been a more logical time to bring our first generation of boats to the market."

In addition to the Eelex, which has an open top and holds up to 12 people, X Shore plans to launch a second model, the Eeltrek, with a closed roof and cabin with sleeping capacity, this autumn.

"We want to make a change in the marine industry founded on a respect for mother nature, and the belief that we can improve the seafaring experience, without changing the oceans themselves," said Bergström. "We are building better, more ethical ways to traverse our seas."

Design and craftsmanship is also a big focus for X Shore. Its Eelex model features what the company describes as a "distinct silhouette" with a high bow and wooden deck and detailing.

The boats are highly customisable, with a railing system allowing for the easy addition of tables, chairs and sunbeds.

While so far most of the attention on travel-related carbon pollution has focused on the roads and skies, X Shore points towards a 2019 report by the Swedish Meteorological and Hydrological Institute.

The body estimated that just over a quarter of the country's shipping emissions came from privately owned boats.

Another company in the consumer market for electric boats is Dutch company Edorado Marine, which focuses on high-speed craft. Another recent innovation is the autonomous electric Roboat, a project from MIT, which will soon be used to substitute for a bridge in Amsterdam.