Takeru Shoji Architects has completed a home in the Japanese city of Uonuma, with small rooms suspended above a double-height living space which sits in a "live-in foundation".

Called M House, the home eschews the conventions for building in Uonuma, which has a climate characterised by hot, humid summers and cold winters with heavy snowfall, by creating a space that is open to the environment rather than shutting it out.

Structures in the city are often elevated on high foundations with thick walls, creating what the practice described as "an isolation between inside and outside" which they were keen to avoid.

Takeru Shoji Architects drew on traditional external buffer spaces such as verandahs and sunrooms and designed the majority of the home as an exposed living, kitchen and dining space opening on to a south-facing terrace. Smaller private rooms are placed at the house's northern end.

"We didn't want to carry forward this convention of separating the inside and outside thus propagating the feeling of being inside one's own environment," explained the studio.

"We wanted the residents to fully enjoy their landscape and its setting."

The home follows the tradition of a high concrete foundation to deal with heavy snowfall, but instead of placing the house atop this foundation, it has been designed as a "live-in foundation" which the home steps down into.

"This raised reinforced concrete foundation is firmly insulated from the outside while the piled-up snow itself acts as an additional insulator, blocking cold winds from entering into the house," said the studio.

The living, kitchen and dining space sits surrounded by this foundation wall, heated by a wood burning stove in winter. In summer, the concrete's thermal mass helps keep the living space cool, "similar to being inside a swimming pool". 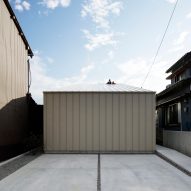 In order to make the walls appear thinner, insulation was built up on the outside, enabling the wooden structure to be exposed on the interior, contrasting the concrete datum of the foundation.

A white-painted block at the home's northern end houses the entrance hall, bathroom and vanity room, with a bedroom on the floor above above.

This connects via an elevated walkway to an open-topped study area which overlooks the living space below and creates a balcony looking out of the southern windows, which can slide back to be completely open to the elements.

Aside from the kitchen counters which sit against the home's northern block, the living space has been left flexible, with coloured oval carpets and a mixture of concrete and wood floor finishes loosely demarcating different areas.

Based in the city of Niigata, Takeru Shoji Architects has previously worked on many private houses in Japan, including a residence that references traditional Japanese farmhouses and a home with a contrasting upper-level raised on wooden stilts.