An apartment shortlisted for Dezeen Awards has been disqualified after an eagle-eyed commenter noticed that the images submitted were computer renders rather than photos.

Nassim Mansion, a three-bedroom residence designed by Singapore studio 0932 Design Consultants, was shortlisted for Apartment interior of the year at this year's awards.

But when the shortlist was announced last week, a regular commenter called Spadestick cast doubt on the project's images.

Dezeen contacted 0932 Design Consultants, which admitted that it had submitted computer-generated imagery (CGI) instead of photographs. The studio said it had completed the design work in 2018 but had not been involved in the delivery of the project. The client had instead worked with a different supplier.

Dezeen Awards rules state that entries "must include at least one photograph of the completed project". Photographs "must be unadulterated and genuine, although minor retouching is permitted". Renders are allowed to be submitted to support entries, but these must be clearly labelled as such.

The project has now been disqualified, reducing the shortlist for the award to the remaining five projects.

In an email Spadestick, who works in the computer-visualisation field but asked to remain anonymous, pointed out several clues in the images that suggested they were not real photos.

"I was also taken in at first, but upon very close inspection, and directing CG work a lot, we tend to pick up the subtle cues that give things away," Spadestick wrote, attaching a series of annotated images highlighting discrepancies in the images of the interior.

These include the same wood grain appearing in different parts of the project, a circular table that has a faceted edge and a curtain being blown in the wind in exactly the same way in two different images.

Other clues include stone texture that continues across joins, suspect colours in parts of a carpet that lie in shadow and an "impossibly long" solid stone step with "weird granite texturing". 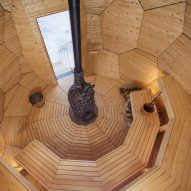 One image features "an extremely sharp top step edge that is normally bevelled in real life so people don't cut themselves".

"Honestly speaking, I like their work, but I also find falsifying documents unacceptable," Spadestick added.

Nassim Mansion is a 1,060-square-metre dwelling in a mansion block in Singapore's District 10.

The project has been widely published and won the People's Vote in the Large Apartment of the Year category at Frame Awards 2019 earlier this year.

Rendering technology means that it is often difficult to distinguish real photos from computer-generated ones. Brands such as IKEA routinely use CGI rather than real photographs of their products, although many people remain unaware of this.

Speaking to Dezeen about the rise of hyper-realistic renders in 2013, Richard Benson, creative director at digital imagery studio Pikcells, said: "The technology can now make these wonderfully realistic images as good as photography, and in some cases better."