Hospitality company Bridgeton and Studio Tack have collaborated to open the Marram hotel, formerly the Atlantic Terrace, in Montauk influenced by the colours and textures of the sand that covers the neighbouring landscape.

Marram, which is named after the wild grass that grows on the property's sand dunes, has 96 guest rooms, a cafe that serves South American cuisine and a freshwater pool overlooking the Atlantic Ocean on New York's Long Island.

The renovated hotel is situated steps away from the restaurants and stores of downtown Montauk and the Atlantic Ocean and the Terrace surf break, which has some of the best waves in the world.

"Marram has both an innate and intimate sense of place that evokes the spirit of its natural, untouched landscape," said the design team, led by Atit Jariwala of Bridgeton.

A light, muted colour palette is used throughout the space to mimic the soft cues of the surrounding nature.

In the lobby walls were left "unfinished" to expose uninsulated white oak panels, with a teal blue check-in desk and artwork by Rhode Island artist Sean Spellman serving as focal points in the entry space.

Ceilings in the guest rooms are latticed with intersecting white oak lumber beams, while walls are coated with hand-textured plaster and handwoven jute rugs cover the concrete floors. Furnishings are white and sandy coloured, with one-off pieces made from salvaged wood. 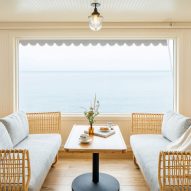 "Bedside tables and stools made from solid Suar wood reclaimed from old homes and fishing boats, cultivate a space reminiscent of a cozy guest room at a seaside summer surf cottage," said the team.

White oak bathroom vanities are topped with mauve and grey-toned marble countertops in the guest bathrooms. Showers feature exposed piping to mimic the look and feel of an oceanside outdoor shower.

A railed fence closes in the pool and patio area which is situated directly on the beach. Red umbrellas and white lounge chairs line the wooden pool deck, where ocean views are interrupted.

Also on the site is Mostrador Marram, a South American cafe, that hones the classic Latin American mostrador in an oceanside communal environment.

Bridgeton is a hospitality company founded in 2009 led by Atit Jariwala. It has offices in New York and San Francisco and has designed restaurants, bars and boutique and lifestyle hotels in New York City and East Hampton.

Studio Tack recently renovated another boutique hotel on Long Island that features a restaurant designed to feel "like a ferry crossing the sound".