The resignation of Joichi Ito for accepting donations from sex offender Jeffrey Epstein is the latest in a wave of departures, protests and torn-up sponsorship deals dubbed "toxic philanthropy". His departure follows similar storms at the Design Museum, the Serpentine Galleries and the Whitney Museum.

Ito stepped down this weekend following revelations that he had covered up donations from Epstein, who committed suicide last month while in prison awaiting trail on further sex offence charges.

It is the latest in a string of controversies over funding to architecture, design and arts institutions from organisations and individuals viewed to have made their money through dubious means.

In July Warren Kanders, vice chair of New York's Whitney Museum, resigned after months of protests over news that security-equipment company Safariland Group, which he owns, supplied tear gas that was used against migrants at the US-Mexico border.

Protests were led by London research group Forensic Architecture, which pulled out of the Whitney Biennial over Kanders' links to the company.

"How do we maintain and support our institutions in ways that don't produce problematic relationships like the one we've just addressed?," Forensic Architecture researcher Robert Trafford told Dezeen at the time.

Her resignation followed press reports revealing that an investment fund run by her husband and others is the majority owner of Israeli spyware company NSO Group Technologies. Human rights group Amnesty International has described NSO's products as "malicious".

The same month, London's Design Museum was forced on the defensive when climate change protest movement Extinction Rebellion refused to participate in the Designs of the Year exhibition.

The group accused specialist insurance group Beazley, the sponsor of the exhibition, of being "counter to our movement's values". Beazley provides cover against political, environmental and cyber risks, among others.

Elsewhere petrochemicals group BP's sponsorship of the British Museum in London has led to ongoing protests, while the Sackler family, which has long donated to a wide range of cultural institutions, has been shunned by a lengthening list of benefactors due to the fact that it profits from the sale of opioids. 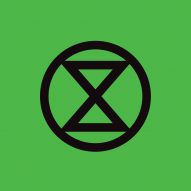 Protests over the billionaire family's ownership of Purdue Pharma, which allegedly continued to sell painkiller OxyCotin despite being aware of its addictiveness led to London's Tate and National Portrait museums, and New York's Guggenheim Museum, announcing they would no longer accept funds from the family.

The following month the Serpentine Galleries followed suit, saying it would no longer accept money from the family after whom the Zaha Hadid-designed Serpentine Sackler Gallery is named.

Referring to the Whitney, Forensic Architecture's Trafford said: "The Whitney now has an opportunity to show leadership on a critical and international issue in contemporary culture, and to enter into a process of reckoning: how should 21st-century cultural institutions reflect and serve their communities?"

But the comment could equally apply to all institutions that have to juggle the need to raise funds with the need to stay in touch with their audiences.

Main image is by Andrew Lichtenstein, courtesy of Getty Images.