Luxury fashion group Louis Vuitton Moët Hennessy has named Hed Mayner the first winner of the Karl Lagerfeld Prize for emerging fashion designers, which has been renamed after the late designer.

Every year, the prestigious LVMH Prize for Young Fashion Designers awards a Grand Prize, alongside a secondary special prize and recognition of three graduates.

The secondary prize was renamed earlier this year to be the Karl Lagerfeld Prize, in memory of the designer who died in February this year aged 85.

Delphine Arnault, director and executive vice president of Louis Vuitton, started the prize schemes to "recognise the emergence of fresh talent is essential to the vitality and diversity of the fashion ecosystem". 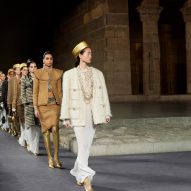 Since the launch of the prize in 2014, Lagerfeld was a returning member of the Louis Vuitton Moët Hennessy (LVMH) jury panel whilst working as artistic director of houses Chanel and Fendi.

Winners of both the grand and Karl Lagerfeld prizes were chosen from eight finalists, where each applicant is required to be under the age of 40 have sold two previous collections in either women's or men's wear.

The judges' pick for the Karl Lagerfeld Prize went to Hed Mayner who "seduced the jury" with layered shirts worn underneath boxy, oversized suit jackets that created the voluminous silhouettes of his gender-neutral collection.

"His collections question the notion of gender through an aesthetic that blends soft lines and structure, simplicity and luxury," said Arnault.

26-year-old designer Thebe Magugu marks another first for the LVMH Prize as the first African and youngest candidate to be awarded the Grand Prize.

Based in Johannesburg, Magugu's winning womenswear collection titled Prosopography was created in homage to the Black Sash – a "revolutionary group of women" who fought for the rights and dignity for people of colour during the apartheid.

"My mission as a designer is to build a global fashion brand that acts as a sort of sanctuary women can turn to for not only beautiful and functional clothes, but a place to learn about our culture and heritage, reinterpreted through a modern lens," he explained in a post on Instagram.

Arnault praised his work, saying his collection appropriates the traditional and the experimental codes of womenswear and menswear, playing with volumes and traditional South-African know-how.

As winner of the Grand Prize, Magugu will receive a €300,000 grant, in addition to one year of mentorship working with a designated LVMH team.

Israeli designer, and first winner of the renamed Karl Lagerfeld Prize, Mayner will receive €150,000 and a mentorship programme.

Through the mentorship scheme, both will be taught and advised in skills to help future businesses, including production, distribution and sustainable development. 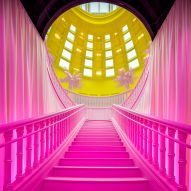 A third tier of the LVMH Prizes is reserved for fashion school graduates, where three winners each €10,000 and join the design teams of a house under the LVMH group for one year.

The LVMH Prize for Young Fashion Designers, which is in its sixth year, was held at the Fondation Louis Vuitton designed by architect Frank Gehry and welcomed more than 1,700 young designers from over 100 countries vying for the esteemed title.