Karl Lagerfeld, the prolific fashion designer who turned around the fortunes of Chanel and Fendi, has died in Paris.

Lagerfeld worked up until his death as artistic director of fashion houses Chanel and Fendi, as well as producing his own label collections each season.

He was as renowned for his personal style and his cutting comments about those he considered fat or unfashionable, as for the clothes he created, always completing his look with a white ponytail, black sunglasses and a pair of white gloves.

Fellow fashion designers have paid tribute to the designer, with Victoria Beckham declaring herself "incredibly sad" at the news.

Donatella Versace took to Instagram to state: "Karl your genius touched the lives of so many, especially Gianni and I. We will never forget your incredible talent and endless inspiration. We were always learning from you." Lagerfeld had worked with Fendi since 1965 designing furs and accessories, and as the artistic director of the label's ready-to-wear clothing since 1977. He took on the role of head designer at Chanel in addition in 1983.

Renowned for his insatiable work ethic over a seven-decade career in fashion, Lagerfeld began as couturier Pierre Balmain's assistant in 1955, before taking over the reins at Chloe a decade later.

Lagerfeld made biggest impact at Chanel

It was at Chanel that Lagerfeld made his biggest mark, by reinterpreting the fashion house's famous tweed each season.

His catwalk shows at Chanel were always extravagant, often costing millions of pounds, with a cruise ship, a fully-stocked supermarket and a 265-ton iceberg as backdrops for his presentations. A Spring Summer 2017 Chanel show at the Grand Palais in Paris saw robots walk the runway.

Lagerfeld often courted controversy, for example by designing Chanel suits in denim for the Spring Summer 1984 show, for his use of a line from the Quran in a Chanel couture show in 1994, as well as for the frequent use of fur in his collections. 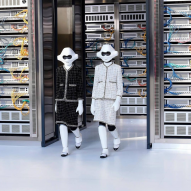 He collaborated with the high-street fashion giant H&M in 2004, producing a collection that immediately sold out. As well as designing clothes, he also turned his hand to photography, and designed furniture, cosmetics and even a teddy bear.

Lagerfeld last took a bow at the end of the Chanel catwalk show at the Metropolitan Museum of Art in New York in December 2018, but missed the fashion house's haute couture show in Paris on 22 January 2019 due to ill health.

Photo is by Stephane Feugere, courtesy of Carpenters Workshop Gallery.