The talk explored the Guiltless Plastic initiative, launched by Orlandi in 2017, which aims to change the perception of plastic to ensure that the material is used responsibly.

As part of the initiative, Dezeen partnered with Orlandi on the Ro Plastic Prize competition in February 2019, which challenged designers to develop new ways of recycling and reusing the material in more cost, time and energy efficient ways.

Fairs and Orlandi discussed how designers are using waste plastic today and what the future holds for the controversial material.

An Istituto Marangoni alumna, Orlandi runs Spazio Rossana Orlandi in Milan and is considered one of the most influential curators in the design world.

The talk coincided with an exhibition of sustainable designs from the Ro Plastic Prize, on show for the first time in the UK at the Italian fashion and design school Istituto Marangoni London, as part of this year's London Design Festival. 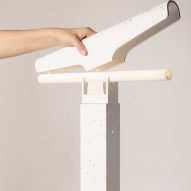 Curated by Orlandi and Mark Anderson, design director of education at Istituto Marangoni in Milan, the exhibition features the work of emerging designers such as the competition winner Alexander Schul, alongside work from more established designers such as renowned Italian architect Pierro Lissoni and contemporary designer James Shaw.

The Guiltless Plastic exhibition will be open to the public from 19 to 22 September 2019 at Istituto Marangoni London, located in the heart of Shoreditch.

Dezeen hosts and livestreams talks and panel discussions from around the world. Recent examples include the annual architecture lecture given by Jean-Philippe Vassal at the Royal Academy in London and a conversation with Arthur Mamou Mani about his bioplastic installation for COS.