New York architecture firms and designers including Snøhetta, Selldorf Architects and Joe Doucet are participating in the city's climate strike today, joining a wave of industry figures taking part in demonstrations around the world.

Architecture firm Gensler and fashion designer Eileen Fisher are also supporting the Global Climate Strike today on 20 September in New York City, which which will see protests in over 150 countries calling for climate action.

The main strike kicked off at midday from Foley Square in Downtown Manhattan, and is led by Swedish activist Greta Thunberg. The 16-year-old established the movement when she started skipping school every Friday to protest in front of the Swedish parliament building in Stockholm.

A number of New York designers and architects, including Joe Doucet, are attending the event with their children. Shane Burger, principal of Wood Bagot's New York office, is marching with his six-year-old daughter and a group from her school that are striking together.

"The energy in this climate march is focused, passionate and invigorating," Burger told Dezeen while at the protest. "In the 15 years I've lived here, I've never seen a march this large," he continued. "I have a tremendous amount of respect fo the focus and drive of this youth-led movement."

"It honestly seems like this generation, unlike any other before it, better understands the profound human impact of climate change. And they really feel like they're going to do something about it."

"It's now our challenge, as designers of the built environment, to tap into this energy and work with them to drive holistic change in our industry," Burger said.

Gensler, whose office is in Midtown, is supporting its employees who wish to attend climate events going on throughout the city, along with SHoP Architects based downtown. "In keeping with SHoP's purpose to foster a more resilient built environment, those SHoP employees who would like to participate and attend the Climate March are encouraged to do so," the studio told Dezeen.

Thomas Phifer and Partners is an advocate of the strike, and said the movement is particularly poignant due to the effect of climate change on New York.

"We're currently addressing the climate challenges facing our community in Lower Manhattan through the design of a coastal resiliency project in South Battery Park City, and are excited to participate in today's climate rally happening in the very same place," Thomas Phifer and Partners told Dezeen.

"Having experienced the flooding and power loss caused by Hurricane Sandy five years ago, our office is intimately familiar with the challenges and dangers posed by a rapidly changing climate," the local studio continued.

"We share a collective responsibility to raise awareness and change our individual behaviours to reduce our overall environmental footprint, but as designers we are in a unique position to make positive change." 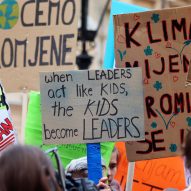 "We hope that a large turnout at the march today will encourage our political leaders and ultimately everyone to commit and enact policy change to protect, restore and fund the environment," continued Selldorf founder Annabelle Selldorf to Dezeen.

Earlier this year, Thunberg urged adults and youth around the world to strike as part of her Climate Strike movement, which has so far been spearheaded by schoolchildren protesting the lack of action over climate change by refusing to go to school on Fridays.

The 20 September date was set in May, and it is three days before the United Nations Climate Emergency Summit on Monday, 23 September. A Youth Climate Summit will also happen tomorrow on Saturday in New York and is the first UN summit for children on climate change.

New York City's public school system announced on Twitter that it "will excuse absences of students participating in the #ClimateStrike". Mayor Bill de Blasio also expressed his support for the movement on Twitter.

Other large-scale demonstrations in the US are taking place today in Boston, Chicago, Philadelphia, Los Angeles, San Francisco, Seattle and Portland.

San Francisco firm HKSArchitects posted on Twitter that its "offices across the nation are participating in the Global #ClimateStrike". Staff have also created climate strike posters featuring the studio's logo.

Who's ready? We are! @HKSArchitects in San Francisco, and our offices across the nation, are participating in the Global #ClimateStrike #Klimastreik Join our #architects and #designers as we march together!#FridaysForFurture @GretaThunberg #blueprintforbetter @AIANational pic.twitter.com/ZuEp8Zz3D5

A wave of Global Climate Strike events are occurring in major cities around the world, including Berlin, Athens, Sydney and London– which was attended by architecture firms Stanton Williams, Grimshaw and dRMM, and designers Usman Haque, Ben Terrett and Sebastian Cox.

International architecture firm Grimshaw – which has offices in New York, Los Angeles, London, Paris, Sydney, Melbourne, Dubai and Kuala Lumpur – announced yesterday via a mass email that it is supporting employees who wish to be involved.

"Grimshaw staff that have expressed interest in the march will be recessing early on Friday in support of this significant event," it said.