Angular three-dimensional tiles have been used to create textural interest inside and out at this south London house extension, designed by architecture studio Proctor & Shaw.

Tile House is located in the neighbourhood of Clapham and has been overhauled by locally-based studio Proctor & Shaw to boast a "subtly complex display of pattern and ornamentation".

Its owners – a couple with two teenage sons – were displeased with the property's existing rear extension, and keen to have more expansive living spaces that are better connected to the east-facing back garden.

The studio completely demolished the old extension to erect a glass-fronted volume that accommodates an open-plan kitchen and dining area.

Each one has been stacked in alternating directions, forming what the studio describes as a "rhythmic elevation of shadow and texture".

A rougher iteration of the tiles has been used to cover the base of the breakfast island inside. 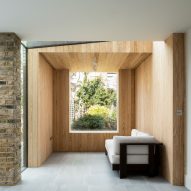 Oak has then been used to craft a cabinet in the adjacent kitchen suite, and to form a long bench seat beside the family dining table.

Planks of glue-laminated spruce plywood are arranged in a grid formation across the ceiling of the extension, bordered by an L-shaped skylight that helps further illuminate the space.

"It's positioned so that the articulated roof structure 'floats' off the walls," added the studio.

Rectangular porcelain floor tiles by Dutch manufacturer Mosa have also been laid across the floor, mimicking the linearity of the planks directly above.

A splash of colour is offered by a timber-panelled partition at the rear of the space, which is painted blush-pink.

It provides a contrasting backdrop to the slate-grey sofa in the adjacent snug and helps conceal some of the utilities in the narrow corridor that runs off the kitchen.

Proctor & Shaw is headed up by architects John Proctor and Mike Shaw, and has been established since 2018.

The studio extended another south London home back in May this year, creating a timber-lined snug that its retired owner could use for reading or birdwatching.