MarinaTex is made from fish scales and skin — waste products that would usually be buried in landfill or incinerated.

It is translucent and flexible, making it a candidate for single-use packaging such as bags and sandwich wrappers, and importantly, it will break down in home composts or food-waste bins within four to six weeks.

Hughes developed MarinaTex as her final-year project for the product design course at the University of Sussex, having set out to create something that would have an environmental benefit.

"I didn't want to use virgin natural materials so I challenged myself with starting with a waste stream," said Hughes. "For me a good design is something that bridges the gap between behaviours, business and our planet."

Unlike some current biodegradable plastics, Hughes' bio-material would not require the establishment of a separate waste collection infrastructure for its disposal.

Another benefit to the product is that it is low-energy to produce and, since its based on waste, doesn't strain the earth's natural resources.

The UK Sea Fish Industry Authority calculates that the country produces nearly 500,000 tonnes of waste annually through fish processing, while Hughes says the waste from just one Atlantic cod is enough to produce 1,400 MarinaTex bags.

In search of an organic binding agent for her prototype of the sheet material, Hughes looked locally to the Sussex coastline where she found agar – a gelatinous substance obtained from the cell walls of some species of red algae.

The final design is the result of more than 100 experiments to refine the bioplastic mixture, most carried out on the kitchen stove in her student accommodation. 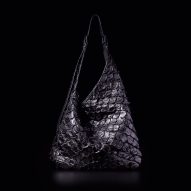 It is strong, boasting a higher tensile strength than LDPE (low-density polyethylene), the current most common material for plastic bags.

According to Hughes, "this shows that the sustainable option does not sacrifice quality".

On the 19 September, the James Dyson Award declared MarinaTex the winner of the UK round of its 2019 competition.

The annual prize recognises top inventions from current and recent engineering and design graduates from around the world.

Hughes wins £2,000 and will now move on to the international division of the competition, where there is a top prize of £30,000.

The final round of the competition will be judged by Dyson's founder, the British inventor James Dyson, who announced earlier this year that he is moving his company headquarters from the UK to Singapore.

Runners up in the UK heats were Anna Bernbaum from the Dyson School of Design Engineering, with her AI-enhanced asthma monitor Afflo, and Bradley Brister from Brunel University, who devised a solar backpack called Sunup.

In last year's James Dyson Awards, the grand prize winners were the UK team of Nicolas Orellana and Yaseen Noorani, who invented the O-Wind Turbine for cramped urban environments.

Before that, recognised inventions have included a skin cancer detector that avoids the need for biopsies and a folding paper bicycle helmet.