Fresh air circulates freely in this Mexican villa by Magaldi Studio, which features open corridors, wooden screens and concrete walls that are mixed with tree sap to increase water resistance.

Casa Madri is located in Mérida, the capital of the Mexican state of Yucatán, which occupies the tip of a peninsula. The two-storey residence was built on an irregularly shaped, corner property within a gated community.

Architect Christian Magaldi, who runs an eponymous studio in Miami, designed the villa for a childhood friend and his family. Their close relationship enabled Magaldi to compose a building that expertly responds to the family's needs and desires, while also taking into account the region's tropical climate.

The architect drew inspiration from numerous sources around the globe.

"The sense of openness and minimalism achieved in this home seems to result from a cross-cultural synthesis of Japanese simplicity, European theoretical analysis and Mexican regionalism paired with a deep understanding of a unique client," the studio said in a project description.

The house consists of concrete forms that wrap a private courtyard – a residential layout that is common in warm climates. But Casa Madri departs from the typical courtyard house because large sections of the dwelling are lifted above the site, allowing fresh air to circulate through the interior. 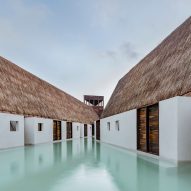 Encompassing 6,000 square feet (557 square metres), the home contains public areas on the ground level and bedrooms up above.

Certain areas are curved, while others have sharp angles. There is no front door – a decision influenced by the "freedom of movement characteristic of the client's lifestyle".

Exterior walls are made of concrete mixed with tree sap, a material known as chukum. The Mayans first developed the material by combining limestone-based stucco with resin from indigenous chukum trees. Chukum is known for being highly water resistant – an important consideration in a tropical climate with heavy rainfall.

Wooden screens were incorporated into the facades to control the amount of sunlight entering the home. The screens help keep interior spaces shaded and cool, in turn reducing the need for air conditioning.

Rooms feature walls and floors made of dark and light concrete. A staircase consists of black metal framing and wooden treads, and is meant to evoke artwork by the sculptor Richard Serra. Throughout the home, timber elements come from parota trees, which are native to the region.

In the courtyard, the team added a linear swimming pool that enables the family to take respite from "the strong Mexican sun".

Other buildings the Yucatan region include a Mayan-inspired resort on a remote island by Estudio Macías Peredo, and the headquarters for architecture firm TACO, which features tall shutters, pink-toned walls and lush vegetation.