Nettles taken from Prince Charles' Highgrove estate were transformed into a collection of garments by sustainable design duo Vin + Omi, for a London Fashion Week show.

The fashion collection was showcased as part of Vin + Omi's Sting project, which has seen the duo develop 20 textiles and processes using stinging nettles since 2004.

"When we first met Prince Charles, we discussed the research we were doing with UK plants; nettle, cow parsley, chestnuts, mushrooms and many others," the duo explained.

"He suggested that we take the large amount of nettle that he strims annually, and experiment further, so we did," they added.

With the help of Oxford Brookes university students – under the supervision of head gardener Debs Goodenough – thousands of nettles were gathered from Prince Charles' gardens at Highgrove, located near Tetbury in Gloucestershire, England.

Vin + Omi employed the traditional method of making woven material from nettles, which involves stripping the nettles of their leaves, rhetting them on grass - exposing the material to moisture to induce partial rotting – and then separating the fibre.

The duo developed a new eco-friendly method of processing the fibre, by way of "mercerisation", which gently strips the nettle of its browny green hue, lightening the fibres to a cream colour.

These cream fibres were then woven, part felted and appliquéd to achieve an array of effects within the fashion collection.

"The nettle material is, in essence, just plant material and will decompose in the same way as any plant," the designers explained. "It requires minimal processing to turn it into the fabric."

A new type of natural, biodegradable glue was also developed to help the fibres bond, and includes pectin as one of the ingredients.

While a series of fluffy, cream nettle garments were left un-dyed, others were coloured with natural plant dyes including woad, which dyes the clothes blue, and maddow, which makes them red.

Some garments featured patchwork pieces of material attached to them, which were emblazoned with symbols and slogans about climate change including "stop fucking the planet", "thought is the new religion" and "planet rewind".

The studio also made garments by repurposing denim clothing, and used recycled paint-tubes sourced from art brand Daler Rowney to make some of the bold-printed clothes. 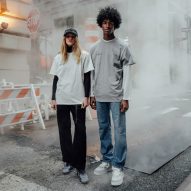 Other materials included sustainable, organic and ethical latex sourced from Vin + Omi's own plantation in Malaysia, and organic linen from their own eco-flax crop.

Models also wore shoes made from a combination of damaged training shoes and shoes that were destined for landfill  – each shoe was made up of up to four or five shoes combined.

Vin + Omi are not the first designers to use plant materials for garments. Tech-based clothing startup Vollebak made a T-shirt entirely from wood pulp and algae, which breaks down in soil or in a composter within three months.

The white tee features a block green print on the front, which has been created entirely from algae grown in bioreactors in a process that turns the aquatic plant into a printable ink.