Artist Benjamin Langholz created a circular staircase of stepping stones to allow revellers to tune out the immersive atmosphere at this year's Burning Man and focus on themselves.

Langholz arranged 27 stones in an ascending ring, supported by a central pillar and three surrounding pairs of columns, to create the installation named Stone 27.

Intended to provide a "shift into a new reality", the journey up and around the elevated stones was designed to take visitors on a "floating walk to experience a moment of complete presence".

Langholz placed the 27 basalt stones at stepped heights to form the continuous circular pathway, which measured seven metres above the ground at its highest point.

With each stone weighing over 450 kilograms, the 13.6-tonne installation was supported by a structural frame consisting of seven minimal steel columns.

"The idea of pathways of floating stones appealed to me because you can present an alternate reality," explained Langholz to Dezeen. "One where something heavy and stable suddenly becomes light and floats in the air."

Three pairs of columns were angled to fan outwards from the central pillar, with each stone attached to  four points in the structure – using to over half a mile of steel rope. At the base of steel support, a pile of basalt rocks placed by the artist hid the structure inserted into the ground.

Rather than removing the black basalt blocks found on the Black Rock mountain, the artist sourced similar local stone so as to not disturb the natural landscape.

"I imagined the way the installation would make the most distracting overwhelming place in the world, Burning Man, disappear and focus someone indirectly on themselves at that moment."

Named after the number of steps in the staircase, Stone 27 was the third project in Langholz's portfolio of "floating" stone installations. His initial project, Stone 1, balanced a singular rock using a similar but simpler column-and-rope frame.

"I realised that if I could make one stone 'float' then I could make pathways of stones for people to walk on," said Langholz. 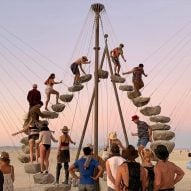 The artist continued to explain that he worked to find the optimum spacing between each stone, to make a pleasant staircase climb to encapsulate a "natural high".

He sought the advice of local rigging practitioners to support various structural models and drawings made by his team to plan the technical aspects of the installation.

The second development of installations was Stone 7, where he began to envision a pathway of stepping stones. Here, seven stones were aligned in a linear ascension up and diagonally down the other side.

It was an installation featured at AfrikaBurn – an official Burning Man event held in South Africa in the spring. Following its success, Langholz began to develop the more ambitious Stone 27 for the playa in the Nevada desert.

Stone 27 was realised in time for Burning Man, which ran from 25 August to 2 September this year.

The project was supported by crowdfunding and constructed with the help of volunteers – a popular community aspect of the festival's impressive installations and pavilions.

The installation became a popular photograph opportunity, with architect Bjarke Ingels one of the visitors to post an image of the climbers on his Instagram.

A Californian artist working in Berlin, Langholz is looking to find a permanent home for Stone 27, just as Stone 7 was sold to a health centre in Cape Town after AfrikaBurn.

His next project will explore stones installed over water, for which he hopes to collaborate with an architect. Elsewhere across the desert plains, architect JKMM designed a sauna to relax and cleanse during the festival.

Photography and timelapse is by the artist unless stated otherwise.