Beaded costumes designed for the Mardi Gras parades in New Orleans by artist and educator Big Chief Demond Melancon were on show at London's V&A museum for London Design Festival.

Two heavily beaded suits designed by the artist were installed in the tapestry galleries at the London museum for the duration of the festival.

Each suit depicts actual and imagined events from African and US history, including a portrait of Haile Selassie and slave ships, picked out in millions of tiny coloured beads that are sewn on by hand.

The suits are finished with a trim of colourful ostrich feathers that form a plumed headdress and edging.

The display was created by the V&A's new curator of festivals, Meneesha Kellay, who told Dezeen that there is a strong synergy between the narratives found in centuries-old tapestries in the gallery and Melancon's work.

"As curator of festivals I'm interested in bringing work, like Demond's incredible suits that can be in dialogue with the spaces in the museum," Kellay told Dezeen.

"The intricately hand-sewn beadwork illustrates events from African and American history, and sit in the gallery among the rare tapestries from 1400s, depicting hunting scenes," she continued.

"In contrast, Demond's complex portrayals draw inspiration from indigenous people in America and enslaved Africans. The genesis of the stories are very different, and feature imagery rich with symbolism and meaning."

A feathered yellow suit from 2018 is called Ethiopia and features the face of Haile Selassie – the defining character in 20th-century Ethiopian history – as well as 14th-century churches in the town of Lalibela, and kings dressed in lion headdresses.

The other suit in the show is called Bras-Coupé. Made in 2016, the beige-gold suit feathered suit depicts a legendary enslaved African prince who led rebellions in Louisiana.

The huge suits have an "apron" that covers the wearer from waist to ankle, which is heavily decorated. Aprons can often measure more than a metre wide.

The artist has chosen to display a story that he feels very connected to – that of the African diaspora – both featuring enslaved Africans and also celebrating their history and culture. 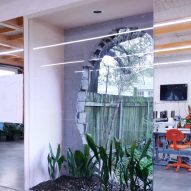 "The apron is the bottom part and the top part is called the dickie. There's a sort of waistcoat that sits in front of the dickie," said Kellay.

"There's masses of work that goes into this and lots of it is unseen, for example there are depictions of the horrors of slavery on the waistcoat itself and when you lift these pieces it reveals figures dancing around a candle underneath," she continued.

"Demond has told me that those are underneath because they're for him to know and for him to see, although people can't necessarily see them at first glance."

Melancon uses beads that measure just 2 millimetres in his work, for the most detailed areas of the design. Each suit can require as many as a million individual beads, that are sewn on by the artist by hand.

"He draws from a really broad variety of stylistic influences," explained Kellay.

"He's taken these suits of one culture and fused them with his own, to give his own take on it, and address this stereotypical representation of black people."

Black masking culture began in New Orleans more than 200 years ago, and gave its name to the V&A's installation.

Melancon is the Big Chief of the Young Seminole Hunters tribe, from the Ninth Ward in New Orleans. He took on the role in 2012, meaning that he leads the tribe through the year and in ceremonial battles on the day of the parades.

He has been creating suits and masking – joining the Mardi Gras parades wearing the suits – for more than 25 years.

The artist is also a founding teacher at the Materials Institute in New Orleans set up by architecture collective Assemble in a repurposed industrial building in the city. The institute offers young people in the area a place to develop their artistic practice.

A selection of suits by Demond Melancon will be on display at at Art Miami in December, as part of Arthur Roger Gallery's exhibition.