A small, neglected warehouse built in the 1850s has been renovated by Tasou Associates to create the light-filled 9 Jeffrey's Place office in London.

Tasou Associates' intervention opened up 9 Jeffrey's Place to bring in more light, making use of industrial materials that nod to the building's industrial past.

The overhaul follows an earlier adaptation of the two-storey building into a dated workspace, which was shortly abandoned as it failed to tackle the building's dark, truncated layout.

"The two-storey property had been neglected for years due to improper conversion from a warehouse to an office space as well as the lack of care and maintenance from previous owners," explained the studio, which is based in London.

"The main emphasis of the project was to open up the building to more natural daylight, creating a bright and uncluttered office space, using robust materials chosen for their longevity."

Tasou Associates began its overhaul of 9 Jeffrey's Place by stripping back the building to expose the original structure.

By doing so they discovered "layers of its history" – ranging from patchwork brick walls, an old loading door and a crumbling hoist at street level – which informed the details of the renovation. 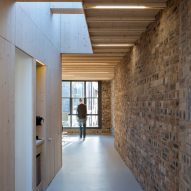 "These discoveries fundamentally inspired the design and all new additions were carefully considered as an impression of the history without attempting to replicate it," said the studio.

Inside, a central statement staircase made from folded steel doubles as a central partition on the ground and first floor.

This creates a mix of semi-private work areas without wasting space on corridors, maintaining an open-plan layout.

Above, Tasou Associates has incorporated a private office in a discreet rooftop extension. Set back from the front of the building, it is barely visible from ground level.

The extension is clad in black zinc to reference building's industrial heritage, and punctured by large windows and a skylight that channels light down into the spaces below through the stairwell.

All the spaces in 9 Jeffrey's Place are decorated with a simple material palette, including exposed brick, light grey painted plasterboard, and oak and walnut detailing.

The latter conceals a small kitchen and bathroom.

Wood has also been used outside, and the building's facade characterised by sliding timber shutters that echo the building's original frontage, and helps to control its occupant's privacy.

Sutherland & Co also recently used a material palette of brick and wood in its self-designed office, which is built within a skinny post war building in Scotland.