Michaelis Boyd has created the interiors for Studio Gang's 57-storey condominium tower, which is under construction in Downtown Brooklyn and slated to open next year.

The tower includes 481 residences that range from studio to four-bedrooms, with around 190 unique floor plans across the structure.

In Michaelis Boyd's scheme, the apartments are outfitted in either pale wood, white and cream finishes or darker and industrial details with grey, black and sage green elements.

The floors of the main living areas are oak, in either a pale or a grey tone, while the bathrooms are covered in marble.

The firm, which has offices in London and New York, said the eclectic mix of materials was intended to reference Brooklyn's industrial past and "creative energy".

"[The interior design] is relevant to the area because Brooklyn has a strong manufacturing history," Michaelis Boyd co-founder Tim Boyd told Dezeen. "We referenced that a lot to really make this fit the context of the place," he added. "It feels very Brooklyn."

For the darker units, blackened bronze and steel accents were chosen for "more tactility" that will "age a little bit," according to Alex Michaelis, who founded the studio with Boyd in 1998. Polished nickel frames and cream feature in the lighter palette option.

Kitchen counters are Italian lava stone and come in either white or dark grey options, depending on the scheme, as well as cabinetry.

Industrial characteristics will continue in the public spaces of 11 Hoyt, along with a blend of colourful and modern details. Exposed concrete walls and pillars are paired with finer elements, such as pale and dark wood panelling and plush chairs and sofas.

Upon entering, there will be a three-story lobby with large, hooped light fixtures that draw attention to the 29-foot (8.8-metre) tall ceilings. An image reveals furniture will be coloured in orange, deep red, blue, soft pink and light green. 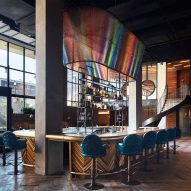 Located on the 32nd floor are a private dining room, catering kitchen, library, cinema and study nooks. Another intimate area comprises built-in booths with hooked lights overhead and a series of small, round side tables.

The fusion of luxury with a relaxed, residential feel is a common thread in interior projects by Michaelis Boyd. A similar aesthetic features in the firm's design for several Soho Houses, including Soho Farmhouse, Soho House Berlin and Babington House, as well as Brooklyn's Williamsburg hotel.

Rounding out the amenities at 11 Hoyt are a greyscale gym, a yoga studio with a swooped ceiling design, a children's playroom with a teal-coloured hill and slide, a sauna and a virtual golf and gaming room.

A private garden and an indoor 75-foot-long (22-metre-long) saltwater pool with green tiles will be built two-storeys above street level.

There will also be 40,000-square-feet (3,716-square-metres) dedicated to retail at the base of the tower. The project spans almost an entire city block, and Hoyt Street, Elm Place and Livingston Street in Brooklyn.

Developed by Tishman Speyer, 11 Hoyt is the first residential building by Studio Gang in New York City. Local studio Hill West Architects is the executive architect of the project.

Renderings are by Binyan Studios.