Chicago architecture practice MANA and skateboarder Scott Oster have added a skate ramp encased within a reflective silver cube in the atrium of Le Bon Marché department store in Paris.

The installation – called Le Cube – was unveiled as the centrepiece of the Los Angeles Rive Gauche exhibition in Paris, where a curated selection of LA fashion, beauty, and lifestyle products were displayed inside the French capital's Le Bon Marché department store.

Created by Oster and John Manaves of architecture practice MANA, the installation has been shortlisted in the retail interior category of Dezeen Awards.

The mirrored cube was placed in the store's central atrium and is punctuated by a full-pipe – a 360-degree concave structure that skateboarders use to perform gravity-defying stunts.

Intended to function as both a stage and a sculpture, the elevated full-pipe hosted live skate performances several times a week.

Its reflective surface also meant that, when the cube was not in use,  shoppers walking along the balconies that wrap Le Bon Marché's atrium could catch their own reflection and take photos.

"When it was not being activated, Le Cube sat quietly, luminously reflecting the architecture of its surroundings—warm lights, decorative iron handrails, and the famous crossing escalators of Le Bon Marché," said MANA.

"Le Cube assists in the rethinking of how the future of retail shall exist not only as a shopping experience, but more importantly, as an exhibition, performance, and spectacle," the practice continued.

Oster was originally approached by the exhibition's curators to design a pop-up space in the store that would house a collection inspired by surf and skate culture on California's Venice Beach in the 1980s. 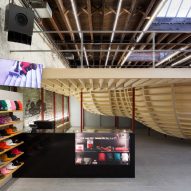 Having grown up in that era and skated professionally, Oster wanted to create something unique and sculptural – or, as he describes, "a piece of art that happened to be skateable".

Inspired by the massive concrete full-pipes he saw as a kid in skateboard magazines, Oster worked with Manaves to design a unique full-pipe set within a cube and wrapped with mirrors.

The cube measured six metres square and comprised of four timber-framed bays, two of which cantilevered over the structure's smaller steel-framed base so that it seems to float above the shop floor.

It was then clad in sheets of lightweight aluminium manufactured by local company Like Mirror. Each one was designed to be flexible so that the vibrations created by skateboarding didn't damage the structural framework.

Narrow gaps had also been left between the panels to form a visible grid across the cube's surface, highlighting the structure's geometry.

"The design not only had to account for the normal static loads of the installation, but also for the dynamic loads of the skateboarder inside," explained the architects.

The internal full-pipe was five metres in diameter and featured a plywood ramp. Lights, speakers, and an access door were installed flush to the ramp's surface to enable unobstructed skating.