A canopy supported by slim white columns covers a hotpot restaurant by MUDA Architects in Chengdu, China which hugs the edge of a lotus pond in a eucalyptus forest.

The Garden Hotpot Restaurant is located at the edge of the Sansheng Township in a suburb of Chengdu, and specialises in the area's traditional cuisine where a simmering pot is served at the table.

MUDA Architects designed the restaurant to have a minimal impact on the local landscape and ecology.

"The natural landscape of the site is beautiful but complex," said the practice. "Eucalyptus trees must be preserved, and the terrain is torturous with a two metre drop."

After mapping the terrain closely, MUDA Architects responded with a simple, lightweight structure with a curved form inspired by steam rising from a hotpot.

Garden Hotpot Restaurant has no exterior or internal walls, only thin steel pillars, with decking below and a roof above.

The structure hugs the banks of the pond closely, growing and shrinking in width in response to the landscape and nearby trees  to "blur the boundary" between the building and nature.

As well as providing seating areas for diners, a low wooden balustrade runs along the restaurant's perimeter to form a viewing walkway that frames panoramas of the surrounding landscape.

"Thin columns are evenly distributed on both sides, and the free curve of the roof forms several transparent viewing frames, so that different views can be appreciated during the process of walking," said the studio. 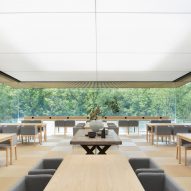 The structure was designed to be welded together quickly and easily in order to allow local workers to take part in the process.

The building forms the first phase in a wider renovation commission for the popular tourist area of Chengdu that MUDA Architects won in 2018.

MUDA Architects was originally founded in Boston, US, in 2015, before setting up offices in both Beijing and Chengdu.

Many new projects in Chengdu respond to the area's popularity as a tourist destination. Recent schemes include The Budapest Café by Australian practice Biasol, designed in pastel hues as a nod to Wes Anderson's film The Grand Budapest Hotel.

Photography is by Arch-Exist unless stated otherwise.