United Nude teamed up with Ross, who is known for his activism for gender-fluid fashion, and stylist Roman Sipe to create the shoe to break the stereotype that heels are intended for women.

"The Shaun Ross x United Nude high heeled boot for men and women brings together an innovative shoe company and an alternative personality, joining the two forces to meld a new generation of style in celebration of diversity," the companies said in a product description.

"This unisex project involves a shoe totally developed from the collective minds of Ross and Sipe, but with no particular individual in mind," the designers added.

Crafted with either black or white napa leather the western influenced boot comes in two heights, one that rests at the ankle and another with a higher shaft that reaches the upper calf. A square toe fronts the design, while a 3.25 inch (8.25 centimetre) geometric block heel lifts the shoe to give it its height. 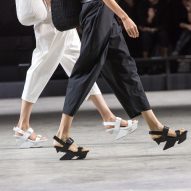 A loop is attached on the shoe's rear and a zipper is concealed in its side. Etched into the inner corner of each heel is a chrome detailing intended to give the "illusion of a sheared edge."

The Shaun Ross x United Nude boot, which was unveiled this month during New York Fashion Week, was made in a limited run of 400, unique production numbers are engraved into the metal. The boots are available in men's and women's sizes and retail for $485 (£298) to $565 (£347).

United Nude was established in 2003 by Rem D Koolhaas,  a nephew of Dutch architect Rem Koolhaas, and shoemaker Galahad Clark.

The brands other projects include sandals with a fragmented platform heel and a series of 3-D printed shoes created by architects and designers such as Zaha Hadid, Ben van Berkel and Michael Young.