Finnish studio JKMM Architects built a timber sauna in the desert for over 1000 revellers to sweat it out during this year's Burning Man festival.

JKMM Architects teamed up with Finnish creative collaborative Sauna on Fire to bring the traditional Finnish sauna into the depths of the Nevada desert.

"We wanted to share the sauna both as a building type and actual experience with fellow Burners, because it is so deeply representative of Finnish identity and culture," JKMM's Samppa Lappalainen told Dezeen. "We also thought bringing a sauna into the desert was so mad that we had to do it."

Called Steam of Life, the pavilion was created in response to 2019 Burning Man theme Metamorphosis, with the idea was to provide a place for attendees of the annual event in the Nevada desert to rest and relax.

It was visited by over 1000 attendees during the annual event, which took place from 25 August to 2 September in the Black Rock Desert in Nevada.

"We felt that a desert sauna responds well to this year's theme of metamorphosis,"  Lappalainen said. "Saunas are about cleansing and regeneration – both physical and spiritual."

The team used a minimal number of building parts to construct the circular pavilion. Timber slabs stacked on top of one another round the entire edifice allowing light to stream in naturally. Two different sizes of plywood form the ceilings, interior walls and sauna seating of the temporary construction.

"Saunas are great examples of timber construction," said Lappalainen. "The Steam of Life pavilion shows how wood can be used in versatile and imaginative ways." 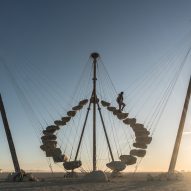 "It's also a tactile, even a humane material, and when sourced properly sustainable too," Lappalainen continued.

All of the material for the timber pavilion was locally sourced apart from the sauna, which the team transported from Finland.

For the duration of the festival, revellers were invited to enjoy the space which is designed to "feel like a regenerative cycle."

The layout follows a circulation route, which begins with a dimly lit passageway that leads to the löylyhuone steam room, where guests bathe on benches near the stove, which emits heat by burning rocks.

After cleansing, visitors continued to a dimly lit space that opens to an atrium located at the centre of the installation. This area is used for the necessary cooling down and meditative relaxing period that comes after spending time in a steam room.

Other temporary installations built for exhibit included Playascape by Alex Haw of Atmos Studio and a circular staircase of stepping stones.

Burning Man was first founded on a San Francisco beach in 1986 by the late Larry Harvey. It has since grown to host a population of 70,000 in the temporary metropolis known as Black Rock City.

Earlier this year, Burning Man co-founder Will Roger told Dezeen how they came to create a pop-up city in the desert.