Art collective Skaparkollektivet Forma has created an installation to house 17,000 unique tiny artworks that represent migrants who were expected to be deported from Sweden.

Skaparkollektivet Forma designed the installation, called 17,000, after they learned that this was the number of unaccompanied adolescents that were planned to be deported from Sweden to Afghanistan.

The work, which was made in collaboration with over 1,500 artists and initially displayed at the Liljevalchs art gallery in Stockholm, has been shortlisted in the installation design category of this year's Dezeen Awards.

"In 2015, our small country received 23,500 unaccompanied Afghan minors. They were provided with housing and schools, joined football teams and were really taken care of," explained the collective.

"But the Swedish government panicked and created a new law, deciding that 17,000 of them should be deported."

The name of the installation refers to the number of unaccompanied minors with Afghan citizenship that the government was planning to deport.

According to the group, many of these adolescents had never even set foot in Afghanistan, having taken refuge in other countries before coming to Sweden, with others not being able to speak any Afghan languages.

The group found that although some of these minors were eventually allowed to stay in the country to study, many are still expected to be deported.

The studio, based in Lund, made the artwork to help visualise each of the 17,000 people. They wanted to emphasise that they are all individuals with unique lives. 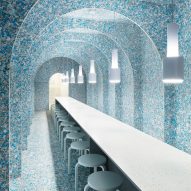 "In the debate on migration, living human beings tend to be transformed into anonymous volumes," said Skaparkollektivet Forma. "But we wanted to understand what this five-figure number actually represented."

"The installation makes the number 17,000 visible and above all shows that behind every number there is a person," they explained. "Behind each figure there is a personality, a story, a work of art."

Five hundred individual artworks are glued onto the shelves of each of the 34 wooden frames. The separate frames mean that it can be easily transported and installed in a variety of ways to fit different exhibition spaces.

The small pieces, made from wood, are cut into different sizes and decorated using various mediums including paint, metal wire, glitter and yarn.

Small workshops in multiple locations created the thousands of mini artworks, alongside self-motivated groups of artists that sent their contributions to Forma in the post. This production process made it possible for anyone to contribute, regardless of their background.

"The great immigration wave of recent years has affected everyone in Sweden, including many of our members, some of whom have been threatened to be deported," explained the collective.

The majority of Skaparkollektivet Forma's members are unaccompanied teenagers and young adults from Afghanistan, as well as refugees from Syria, Iraq and Somalia. Swedish nationals make up the rest of the membership.

Its members present the work at exhibitions, providing the opportunity for them to share their stories with the visitors.

According to Forma, 17,000 has led to twenty organisations protesting against deportation in Sweden, catching the attention of the public and decision-makers.

"The installation affects everyone, regardless of age, language and social background," said Skaparkollektivet Forma.

"At first glance, you see it as this monumentally beautiful artwork, but when you read the stories, the beauty of the work is contrasted by the cruel reality at its heart."

The installation is shortlist for Dezeen Awards alongside the Zero Waste Bistro installation that was set up at the WantedDesign Manhattan fair and a shelter made from mud-spraying drones that could be used as a prototype for emergency homes.

Photography is by Felix Gerlach and Martin Spencer.