Stephanie Chaltiel used drones to coat a shelter in clay, demonstrating a fast construction method that could be used in refugee camps and disaster zones.

As part of designjunction during the 2018 London Design Festival the French architect and her team constructed Mud Shell, a sturdy domed shelter from bags of hay attached to a wooden lattice that was then sprayed with a mixture of clay and fibre using a drone. The project

The resulting structure can be constructed rapidly, in this case just four days, from cheap, lightweight and readily available materials. It combines the ancient building techniques of wattle and daub with cutting edge drone application technology.

Little sacking bags filled with hay were mounted on a formwork of wooden struts arranged in a dome shape. The drone-sprayed coating binds the structure together, making it durable, weatherproof and permanent.

"For the past 20 years I've been working with earth architecture," Chaltiel told Dezeen.

"I did a lot of prototypes by hand, working in Mexico on housing projects, so I had an idea about which steps could be automised."

Mud Shell would have taken weeks to coat by hand, she estimates, where the drone could achieve that effect in minutes.

Chaltiel is hopeful that this system could be applied to building emergency housing in disaster situations or refugee camps, using clay sourced from the surrounding site.

"The drones are quite easy to bring to any site. When dismantled they fit into two [pieces of] luggage and the pump is on wheels so it can reach remote or difficult areas without the need for scaffolding or cranes," she said. 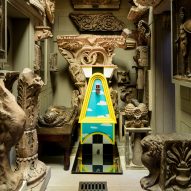 Chaltiel has been experimenting with a variety of mud mixtures with her projects, including a prototype hut built in Domaine de Boisbuchet in France and a five-metre-high wall in Belgium.

"My work has been to fine-tune which kind of material could be fitted in the drone," she said.

"We work together to make the tool viable so you can spray huge amounts and have a constant flow of material, which is a limitation at times for digital fabrication."

Clay acts as the glue and arid ingredients such as sand, marble powder and lime absorb excess moisture. The architect has experimented with adding different fibres to the mix to reinforce the structures and prevent the surface from cracking.

"For this project on the Southbank we used linen fibres, which are really thin and long, a bit like a human hair, that breaks down in the machine so it doesn't block the pump," Chaltiel explained.

The drone was custom made by the team's engineers in Belgium at the University of Leuven, and requires a pilot and a co-pilot. The mud mixture is fed through a hose underneath that acts like an umbilical chord.

The drone team have been experimenting with automated flights, but were constrained by London's strict aviation rules that prevent drones from being flown in most urban areas.

"Until the very last minute we weren't sure if we could do it, because of the new laws that were passed at the end of July," she said.

"We found out that with a netted volume it was considered an inside [space] and therefore health and safety regulations apply and not aviation laws."

Chaltiel hopes that the installation proves the drone spraying system has the potential to be used safely for construction in dense urban areas.

The architect and her drone team have also been working on a system that would allow the drone to coat large areas at a time. They are currently working on a project in Vietnam where a fairly inaccessible house on a cliff could be sprayed using the drone.

In London a company is already buying up rooftops in the expectation that transport drones will use them in the near future. Taxi platform Uber has released preliminary designs for  "skyports" where drone-like aircraft could land. Dezeen has created a documentary, called Elevation, which explores how drones are changing cities.