Ethereal floating jellyfish and the glowing northern lights are among the scenes projected above diners in this high-end Copenhagen restaurant, which has been designed by Studio Duncalf.

Exclusively offering a 50-course tasting menu, Alchemist has been designed to "take diners on both a physical and intellectual journey".

The restaurant started life as a tiny 16-cover venue in central Copenhagen. But, when investors offered a chance for expansion, head chef Rasmus Munk worked with Studio Duncalf to create a bigger and more eccentric space "that otherwise would have been dismissed by engineers and architects".

"In the previous incarnation of Alchemist, like the vast majority of high-end restaurants, the experience was focused almost entirely on the food, a noble aim in itself," said the studio's founder, Mike Duncalf.

"For this version of the Alchemist, however, Rasmus was looking to enhance the experience by creating an extraordinary physical environment which includes visual and audio stimulation," he told Dezeen.

Alchemist's second iteration is located on Copenhagen's industrial Refshaleøen island, which is dotted with other trendy eateries and bars.

It takes over a building that once served as a boat workshop and later as a set design space for the Danish National Theatre. The cavernous interior has been transformed to feature a sequence of unique dining spaces that Studio Duncalf felt suited the restaurant's multi-course menu.

Diners enter the restaurant via a three-metre-high bronze door that's been carved to feature a sprawl of gnarled tree boughs. They immediately step into a gallery-style space, for which different artists will be invited to create immersive installations.

At the time of opening, the room was covered in colourful graffiti-style illustrations by Japanese artist Lady Aiko, which depict New York street scenes.

A short partition wall then slides up to grant access to a grandiose bar area where cocktails and the initial, lighter food courses will be served.

One side of the 14-metre-high room is dominated by a three-storey glass wine cellar that's stacked with 10,000 bottles.

Four-metre-long brass pendant lamps dangle from the ceiling, illuminating casual seating areas below which are dressed with pink and navy velvet chairs. 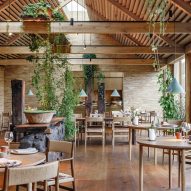 A kitchen runs along the rear of the room, fronted by panes of glass so that diners can see the chefs at work.

Various unusual ingredients are stored inside clear jars against a backlit gridded shelf, much like how specimens are displayed in a science lab.

Diners walk up a flight of stairs and across a glass-bottomed bridge into a secondary dining room, which is topped by a huge dome.

Measuring 18 metres in diameter, the dome can be projected with moving images ranging from a night sky streaked with the northern lights to a swarm of jellyfish floating amongst plastic bags – an attempt by Munk to raise awareness of the world's polluted oceans.

Diners below sit around concrete bench tables, turned towards the kitchen to keep-up the "visual experience". Unusual dishes on offer include a cherry-glazed lamb's brain and foie gras served inside a fake human head.

A lift then takes diners up to the third and final dining space where dessert is served. Completed in a much cosier fit-out, it has been finished with timber floorboards by Dinesen and plum-hued sofas.

This space also boasts a fire pit and a tea ceremony bar.

"We don't apply a particular preconceived house style onto any project, our approach tends to focus on the specific needs of the client, their customers and the space available and we took the same approach here," explained Duncalf.

"Working on such a spectacular scale inherently helps create an element of theatre. It would have been a mistake, however, to simply rely on the size of the space to do the work so we had to work hard to create intrigue and ambience without the atmosphere simply dissipating in the void."

Studio Duncalf has been established since 2016 and is based in south London.

Its Alchemist project joins a number of high-end eateries that are already dotted across Copenhagen, a city known for its rich culinary scene.

Last year saw Michelin-starred Noma set up a new home in the Danish capital. Set inside an ex-military warehouse, the restaurant has a series of open-plan dining spaces dressed with warm oak furnishings.

Photography is by Claes Bech Poulsen.