An extensive exhibition of Charlotte Perriand's work at the Fondation Louis Vuitton in Paris reveals the art-filled interiors and architectural scale of the French designer's expansive life and career.

Charlotte Perriand: Inventing a New World marks 20 years since Perriand passed away at the age of 96 in 1999.

The show is the first time the entirety of the Frank Gehry-designed gallery has been given over to the work of a single artist.

Spread over four floors and occupying 11 galleries, the exhibition includes 50 rare examples of her furniture designs, including pieces from her time working in Japan and Brazil.

Reconstructions of seven spaces designed by Perriand, including two posthumous realisations of her designs, and 15 scale models are also on display for visitors to explore and interact with.

Perriand is perhaps best known for her connection to the French architect and designer Le Corbusier, who she became an associate of at the age of 24.

Despite being a renowned designer in her own right before working with Le Corbusier to create the famous chaise longue basculante B306, Perriand's work is overshadowed by the modernist architect.

This is a frustration for exhibition curator Sébastien Cherruet, who wants the exhibition to draw more attention to the breadth of her work.

"It's a shame people only know her as a woman who simply designed furniture for Corbusier – not just for her, but for women of the 20th century," Cherruet told Dezeen.

"People need to see how she designed spaces and the synthesis with art," he continued. "She was able to work from the scale of a spoon to the masterplanning of a city."

Charlotte Perriand: Inventing a New World includes everything from replicas of pre-fabricated modules she designed for the ski resort Les Arc, to the homemade ball-bearing necklace that was her accessory of choice in the 1920s.

Full-scale versions of a prefabricated mountain refuge and a waterfront holiday home, unbuilt during Perriand's lifetime, are also included in the exhibition.

Tonneau Refuge, an aluminium-clad wooden cabin she designed in 1938 has been constructed inside gallery number 11. To construct it, the museum team had to transport it up to the fourth floor piece by piece, just as Perriand had intended the hut to be built in a remote location.

Outside the gallery, a Perriand-designed holiday home that the Fondation Louis Vuitton built for the first time at Design Miami 2013, perches on stilts over the pool in front of the cascading water feature.

To illustrate her connection with the art and artists of the era – several of whom were personal friends – the Fondation Louis Vuitton has displayed Perriand's furniture, objects, interiors, drawings and photography alongside works by 15 artists, including Pablo Picasso and Fernand Léger. 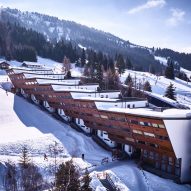 Sets from her 1955 display at the Takashimiya department store in Tokyo, called Synthesis of the Arts, have also been recreated and displayed with complimentary artworks.

A full-size recreation of an exercise room features the original Leger painting Perriand commissioned specially for the room. Perriand's son-in-law Jaques Barsac tracked down its owner in the US and persuaded them to lend it to the show.

Barsac and Perriand's daughter, Pernette Perriand-Barsac, were closely involved with creating the exhibition. Barsac is about to publish the fourth volume of his complete works of Perriand.

A replica of the lost futuristic apartment Perriand designed at Place Saint-Sulpice has been painstakingly recreated, including the freestanding shower with a hemispherical screen that was seen as scandalous in  1927. While her work seems contemporary now, stresses the curator, at the time it was too avant garde to become widely adopted.

Striking black and white photographs she took of found bones and pieces of wood are displayed along plenty of examples of her better known designs, namely the Nuage bookcases and cabinets, and the swooping chaise longue basculante.

Moving through the galleries, visitors are invited to observe how Perriand adapted these core designs according to the context she was working in.

The bookcases and lounge chairs are rendered in metal and polychromatic colours in France. When she first visited Japan in 1940 she re-imagined them in bamboo, then later in Brazil in the 1960s she re-made them again in local hardwood.

As well as contemporary art, Perriand's work engages with her passion for nature, her socialist ideology, and her feminist disregard for the restrictions placed upon her gender.

A prototype for a window for student housing includes a Picasso sketch that is revealed when the shutters are slid across to block out the light is included in the exhibition, illustrating Perriand's egalitarian approach to art.

Models and full-size replicas of open plan kitchens Perriand designed demonstrate he insistence that women not be relegated to closed-off kitchens.

The final, bamboo-filled gallery of the exhibition features the Tea House Perriand designed for UNESCO's Paris headquarters in 1993, with a domed canopy of green tensile fabric patterned by a silhouette of leaves.

Charlotte Perriand: Inventing a New World is at the Fondation Louis Vuitton in Paris from 2 October to 24 February 2020.