Les Arcs, a 1960s ski resort in France designed by a collective of architects led by Charlotte Perriand, is celebrating its half centenary. Here are the architecture highlights of the modernist resort.

Part of the Paradiski area, Les Arcs today is formed of four villages named for their altitude, Arc 1600, Arc 1800, Arc 2000 and Arc 1950. The first villages were built first and under Perriand, and are significant examples of 20th century Alpine architecture.

Perriand aimed to push the boundaries of prefabrication to make producing high-quality mass housing possible in the short summer building seasons. Les Arcs was built on a greenfield site, with lifts and new buildings added each year as the resort expanded. The architects also carefully preserved the existing cowherd huts that dot the slopes.

The architect, then her 60s, was at the peak of her career in 1967 when she was brought on board to lead a team of young architects tasked with turning a plot of virgin alpine pasture into a ski resort.

With the post war French government promoting the mountains as a holiday destination and paid annual leave legally upped to four weeks a year, developer Roger Godino and ski guide Robert Blanc created the ski area to take advantage of the new wave of leisure seekers heading for the slopes.

The resort first opened for the winter of 1968/1969 season, and over the next 20 years Perriand oversaw designs as the resort was gradually expanded. 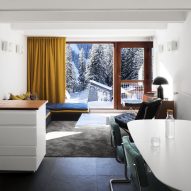 As well as pushing the boundaries of prefabricated mass housing, Les Arcs aimed to be progressive in its attitude towards the natural environment. The resort was intentionally masterplanned to be entirely car free, and each building was carefully adjusted to have as minimal a visual impact on the mountain landscape as possible.

In the two phases overseen by Perriand, Arc 1600 and Arc 1800, buildings lean into the slopes rather than tower above them, making thousands of holiday homes appear to meld into the mountainside.

Perriand was one of the leading modernist designers of the 20th century. She collaborated with Le Corbusier and Pierre Jeanneret between 1927 and 1937, creating numerous pieces such as the B306 chaise lounge.

Read about five architectural highlights in Les Arcs below:

Designed by Rey-Millet and Perriand, the apartment block La Cascade was the second building to be built in Les Arc. The most instantly recognisable building in Arc 1600, it cantilevers out over a ski slope on one side.

In order to make each apartment's terrace an equal size and equally sunny each storey of the structure is moved back 1.4 metres on the southwest side. To keep the apartment sizes equal, too, the building leans out an equal distance on the northwest side.

Large windows set into the tilted back walls of the apartments were designed to catch the light reflecting off of the snow. In total, 140 two to five-bed apartments are spread over seven connected four-storey blocks that are staggered up the slope.

Each block has a separate ski-in entrance. In the boot rooms the benches are deliberately proportioned and arranged so two people could sit back to back as they remove their ski equipment, and the slatted timber boot lockers have gaps to ensure ventilation and help snow-covered kit dry.

Arc 1600's largest building was designed by Regairaz and Rey-Mille under the supervision of Perriand. The staggered levels were built in stages over a series of summers and the whole complex completed in 1974.

Le Versant Sud is is set into the side of the mountain and its flat roofs are covered with snow in the winter, making it practically invisible when viewed from above. The stepped arrangement was designed to make a building housing 232 holiday homes as visually low impact as possible.

Full-height windows are arranged all along the facade facing across the valley to catch the sunlight. Viewed from below when arriving at the resort the coloured curtains pulled across these windows form a pattern in a colour-blocking grid determined by Perriand.

The biggest residential complex designed by the original group of architects is Belles-Challes and Lauzières. The two buildings hold 3,150 beds in 590 residences spread over 17 storeys.

Following the contour of the mountainside, the buildings are stepped along the slope, with the balconies along the facade carefully arranged to give the appearance of a continuous facade. Ramping pedestrian pathways criss-cross the centre of the buildings, allowing people to walk from ground level all the way up the slope along with the building as it rises.

Perriand designed the rooms for the buildings, which are split between a hotel and semi-catered holiday apartments, to be as compact as possible to maximise the number of affordable places to stay in Les Arcs.

In order to achieve their socially democratic aim, these buildings that pushed the limit of Les Arcs prefabrication. It took four consecutive summer building seasons to finish the complex, which has pre-fabricated fibreglass shells of the bathroom and kitchen modules.

These self-contained chalets sit on the outer edge of Les Arc 1600 over a forested slope. Designed by Taillefer, a trained carpenter, Les Chalets Pointus has a simple self-build design.

Employees of the ski resort who lived there all season purchased a plot of land and the plans and built them themselves. All the chalets face south-west, and their rooftop ridges are angled to point to a single spot further up the slope.

Each one has a plan in the shape of an isotoxal star, with triangular facades that create the eponymous pointed roofs. Large windows set into the gables give through-views to the vista of mountains across the valley and triangular terraces supported at their point by a single column provide a sunny place to sit outside.

A committed socialist and feminist, Perriand aimed to bring her egalitarian attitude to the architecture and interior design of Les Arc. Rental apartments were designed to be affordable and filled with beautiful yet durable objects she designed specifically for each building.

She insisted on open-plan kitchens so women wouldn't be sequestered from the rest of the family during their holidays, handing out her phone number to potential buyers who wanted more walls put in so she could personally talk them round.

Modular kitchens and bathrooms were made offsite then carefully sequenced for their arrival on site. The plug-and-play design meant they could be craned into place then quickly hooked up to the water and electricity.