A five-sided pyramid with cutouts influenced by constellations was created to pay homage to heroic woman during this year's Burning Man festival.

"By creating Andromeda Reimagined, we wanted to challenge the classical patriarchal Greek myth of Andromeda, wherein a young woman is chained to a rock, left to be devoured by a sea monster that was sent by the Gods to punish her mother for the arrogance of proclaiming her daughter's beauty," Marx told Dezeen.

"Within this new narrative, Andromeda saves herself, with the help of her community," he added. "The 'rock and chains' have been morphed into a story of her inner journey to find strength and purpose in a world of chaos and absurdity."

Created for this year's Burning Man, which took place from 25 August to 2 September, the ornate pavilion comprises a series of simple elements so that it could be easily built by Marx's nearly all-volunteer team, and easily packed up and transported to the desert site.

"At Burning Man, you are also faced with the slightly daunting task of remote construction," Marx said. "We had to pack it all into a box truck, and once we were on Playa we could not source anything we forgot to bring … the nearest hardware store is 200 miles away." 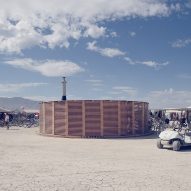 At night a gold lantern, formed from rotary cut plywood, illuminated the structure's interior and cast whimsical designs onto the desert ground.

Freedom and Awaken, an eight foot tall (2.4-metre-tall) bronze statue by Mischell Riley, was placed in the centre of the pavilion. Visitors were encouraged to leave their mark by proclaiming their own female heroes using markers that hung from the walls.

Each year architects and designers are tasked to create pavilions to populate the Burning Man's site in the Black Rock Desert in Nevada. Others created for this year's event included a timber sauna by Finnish studio JKMM and a circular staircase of stepping stones designed by Benjamin Langholz.

"Burning Man, at its most elemental level, provides an opportunity to shift various social norms in unexpected and provocative ways," said Marx.

"But very rarely, as architects, do we design and build, using our own resources, with a pure sense of contributing to the vibrancy of our communities, where our imagination is only restrained by the amount of time and resources, we are capable of committing."